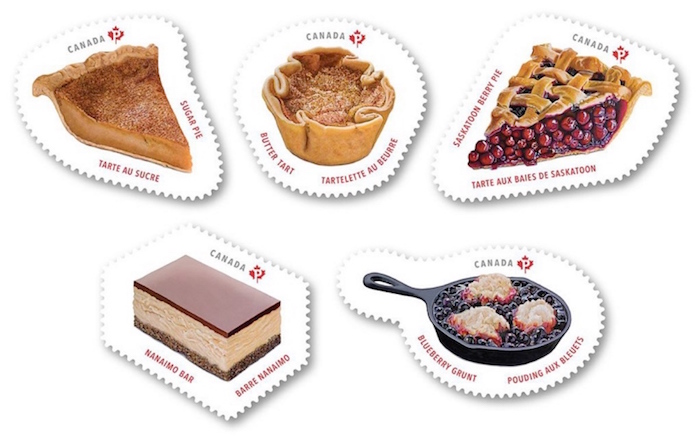 In early April, I received an event update informing me of the unveiling of The Nanaimo Bar Stamp at the Nanaimo Museum. It immediately took me back to my childhood. When out for dinner, I would pile the treats in tall stacks on my dessert plate, only to eat the top two layers of each bar. Though I was born and raised on Vancouver Island, I was always ironically curious about the Nanaimo Bar: did it have any connections to the city?  If so, what Nanaimo Bar was the best in Nanaimo? Does anyone else share my distaste for the bottom layer? Despite entering my fourth year studying at VIU and a resident in the Harbour City, I had never answered these basic questions that had so plagued my childhood.

You might be wondering exactly what a Nanaimo Bar is, or perhaps you’ve been munching on them long before you arrived at VIU, and now you share my previously unsatiated curiosities. So, what’s in a Nanaimo Bar? Please, hold the dad jokes. The main components of a traditional Nanaimo Bar consist of coconut, graham wafer crumbs, chopped almonds or walnuts, vanilla custard powder, icing sugar, chocolate, and butter. Although it’s only a little more complex than how I’ve listed it, the Nanaimo Bar is a simple, no-bake dessert with a history rich enough to rival its flavour.

The origin story of the Nanaimo Bar is one full of controversy. The earliest documented recipe matching the contemporary Nanaimo Bar can be found in the 1952 Nanaimo Regional General Hospital’s Women’s Auxiliary’s Cookbook. Although the origin of its title remains a mystery, the earliest documented reference to the chocolate square’s now-famous name is attributed to Edith Adam’s cookbook published by the Vancouver Sun in 1953. Despite this documentation, many claim to have the original recipe.

Maya Redlick, a social media and marketing intern at the Nanaimo Museum, guaranteed that when covering the front desk “almost everyday, someone would say that their great-great-grandfather or great-great-uncle was the first one [to make the Nanaimo Bar] and would put it in their lunches.” Though this is a common occurrence in the museum and beyond, she noted that there is no legitimate way to “substantiate” these claims or “fact check” them.

Aside from the complex origin story, the Nanaimo Museum offers a full exhibit dedicated to the Nanaimo Bar. Along with the detailing of the dessert bar’s history, the exhibit displays the Nanaimo Bar stamp, the item that initially caught my interest.

The Nanaimo Bar is one of five classic Canadian confections to be eternalized in stamp form by the Canadian Post. Joining Nanaimo’s famous treat are the Blueberry Grunt, Sugar Pie, Saskatoon Berry Pie, and the Butter Tart. On April 17, 2019, the sweet stamp collection was released to the world.

Although I am familiar with the other four desserts, I wondered if any of the other treats were as popular as Nanaimo’s own. I understood I might be biased, so I asked a dear friend of mine, James Matchett—Ontario born and raised—if he was familiar with Nanaimo Bars.

“I am infatuated with them,” Matchett quickly replied, “I knew about them way before I knew Nanaimo was a place.” In Ontario, like Nanaimo, Matchett said, “pretty well any bakery has them,” and some places have different assortments, “like maple bacon, and salted caramel.”

The next question burning in my mind: “Who has the best Nanaimo Bar in Nanaimo?” Apparently, everyone was searching for the same answer back in 1986. Back then, the city arrived at a conclusion when Joyce Hardcastle won a competition to determine who had the best recipe. The notable difference in Hardcastle’s version from the one found in the Nanaimo Regional General Hospital’s Women’s Auxiliary’s Cookbook is an exchange of walnuts for almonds. Despite this seemingly significant detail, the secret to Hardcastle’s recipe is actually unsalted butter, which was a phrase I became accustomed to hearing.

There is no doubt Hardcastle’s famous recipe is the blueprint to Nanaimo Bars worldwide, however nearly four decades have passed, leaving plenty of room for creativity to influence the famous dessert. My mission then was to find the best contemporary Nanaimo bar in the city it was originally created.

Morgane Riddell, a visitor information counsellor at the Nanaimo Visitors Centre, was kind enough to introduce me to the Nanaimo Bar Trail. She noted that the idea for the trail came from Marketing and Media Specialist at Tourism Nanaimo, Chelsea Barr, and the trail began in 2016, so some updates were required. The initial trail mapped out 39 stops in Nanaimo that offered Nanaimo Bar related food, drinks, merchandise, information, and even pedicures. “There’s everything from deep fried Nanaimo Bars to Nanaimo Bar Martinis,” Riddell said.

Unfortunately, I never completed the trail; however, I came incredibly close. Realistically, there’s only so many Nanaimo Bars one person and their bank account can take without exploding, plus, I was happy with how my nails were, so I skipped the pedicure.

Before I planned my own stops, Redlick recommended Serious Coffee because “they use the Hardcastle recipe,” as well as Smokin’ George’s BBQ.

Riddell suggested Bocca Cafe for the best traditional bars and said that for those looking for something different, the cupcakes at A Wee Cupcakery were fairly popular.

Dino Tsembelis, the Visitor Services Specialist at the Nanaimo Visitors Centre, simultaneously suggested McLean’s Specialty Foods, and informed me of an ongoing clash of recipes. “There’s no almonds on this island,” Tsembelis said. McLean’s opts to use walnuts instead of almonds. Therefore, McLean’s uses a recipe that is more traditional than The Traditional™.

Because I have a stack of notes dedicated to each and every Nanaimo Bar I consumed, I will save you from the most laughable and unprofessional food critiques to ever grace the planet. Instead, I will offer up my thoughts on the most notable spots on the trail.

A Wee Cupcakery: Popular is an understatement when it comes to the Nanaimo Bar Cupcake. While working my way through the trail, I made three separate stops at A Wee Cupcakery, the first two times leaving empty handed. When I finally got my hands on the cupcake, it was just before noon and only about an hour after the mini shop had opened. Unfortunately, “the early bird gets the Nanaimo Bar Cupcake” doesn’t have quite a nice ring to it, but it’s true. The cupcake had a crumbly layer on the bottom that strongly resembled that of a traditional Nanaimo Bar and the icing on top imitated the middle cream filling layer. On the very top sat a chocolate chunk that replaced the usual ganache layer. Despite the rearrangement, all three layers of a Nanaimo Bar were covered, and the cupcake was absolutely worth the wait.

The Buzz Coffeehouse: The Nanaimo Bar Stamp was met with mixed feelings by many, as the image featured an excessive amount of filling in the middle layer. In nearly every bar I found, the bottom, crumbly layer made up half the bar, while the other two layers, together, made up the other half. The Buzz Coffeehouse offered a Nanaimo Bar cheesecake, and although it was also very tasty, I think it’s most notable as the closest thing I could find to the stamp, based on appearance.

The Nanaimo Bar: Simply the name of this fine establishment is notable enough. It would be ludicrous if The Nanaimo Bar was Nanaimo Bar-less. However, of the few establishments that sell Nanaimo Bar-inspired alcoholic beverages, The Nanaimo Bar has the widest variety. Although I do not condone alcoholism, this step in the trail moves into a fun and more mature territory—meaning you have to be nineteen and older to legally take part. I went in order of shot, to martini, to cocktail. While the shot and martini are equally good and use fairly similar fixings, the cocktail stood out the most—to be fair, if I went in the reverse order, I might say the shot is the best.

Javawocky: If I could measure the quality of this traditional Nanaimo Bar in size, I would say it is extra-medium. There is something so fantastic about how plain this bar is.

Bocca Cafe: Bocca has a decent variety to choose from when it comes to Nanaimo Bars. Riddell pointed out that Bocca won first place in a 2013 Nanaimo Bar competition with their traditional bar, and I thoroughly understand why. Although I experienced bliss with a few different variations of the Nanaimo Bar, Bocca had the only traditional Nanaimo Bar that blew my mind.

In an extended interview with Darbyshire and his manager, Carl Beaulieu, they mentioned that people from all over come specifically for the restaurant’s bars. “A full pan of Nanaimo Bars will sell in one, two days,” Beaulieu said.

Although they mentioned two other recipes shelved, and used only so often, there is no doubt that the two competition-winning bars are amongst the best in town. In a public poll, it was revealed that 54 percent of the general public prefers the Dulce De Leche bars over the Maple Bacon bars. But what sets these bars apart from the others?

Darbyshire said, “it’s the creativity, care, and time that gets put into the bars,” that makes them so special. “No one does what we do,” he continued.

And, finally, Beaulieu put my final childhood question to rest. “We hate coconut, so we switched it up.” Instead, the innovative restaurant replaces the coconut in the bottom layer with pretzels. “You got to be unique,” Beaulieu said.

Choosing an absolute favourite is no easy task after experiencing what Nanaimo has to offer, but if I had to choose, I would agree with the people. The Dulce De Leche is the best. However, a successful Nanaimo bar would be difficult to fall short of. It wouldn’t be bold to say Nanaimo bars are profoundly good. But if you can’t take my word for it, maybe you can take Seth Rogen’s.