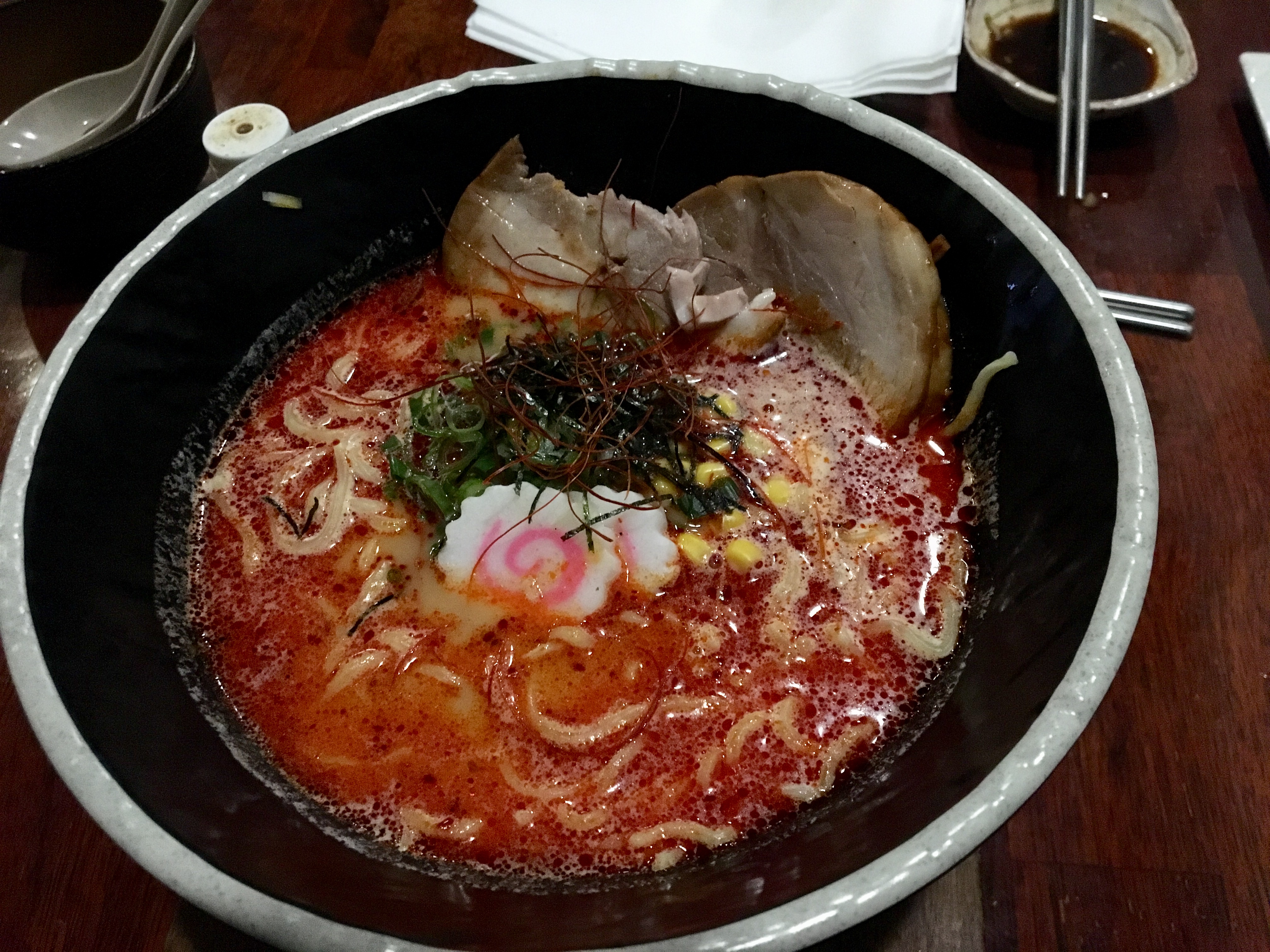 I took it upon myself to visit all the restaurants in Nanaimo that serve Japanese ramen. They stretch south to north, each with their own unique flair, restaurant atmosphere, and traditional Japanese qualities: Bistro Taiyo, Nana Sushi, Wa-Ku, Umai, and Nori.

My Japanese friend from VIU, Hikarua Nakamura, came along when she was available and struggled with me through bowl after bowl of unctuous broth, slurpy noodles, and tasty toppings. We have collaborated to judge each establishment out of 25. Each can receive a maximum of five points in five categories: atmosphere, tradition, luxury bowl, wallet-friendliness, and, of course, Instagramability.

Before I dive in, it’s important to know there are four main varieties of ramen: Shoyu (soy-sauce base), Tonkotsu (pork bone broth base), Miso (soybean base), and Shio (salt base). Each are unique in flavour, though they have similar toppings. Ramen essentials are: quality broth, noodles, and toppings. There are rarely more than four toppings in one bowl (unless you’re paying extra). The options are: green onion, corn, boiled egg, pickled ginger, nori (seaweed), chashu (braised pork belly), narutomaki (fish cake, AKA that white round thing with the pink swirl), and kikurage [kee-koo-rahg-ay] (Japanese mushroom).

Hikaru has a deep, life-long relationship with all varieties of ramen. “In Japan, I have four shoyu, four tonkotsu, three miso, and one shio ramen places that I love. I’m picky about my shio.”

I asked her about her favourite broths, and to choose three toppings.

“My favourite broth really depends on my mood, but for toppings I love chashu, egg, nori, and scallions. Don’t make me choose between nori and green onion, they are both essential in my opinion.”

Bistro Taiyo is off Wesley St., tucked in behind La Stella Trattoria. A wall of smiling polaroids and Beatles’ hits beckon customers into the bright restaurant. Tables line the cream-coloured wall all the way to the back. The catch, I learned the easy way, is that they only have tonkotsu ramen on Sundays. The universe was on my side as I walked into Bistro Taiyo on a Sunday afternoon, ignorant of that fact. Their tonkotsu bowl fell smack in the middle of the wallet-friendly category at $12.45. It had a beautiful smooth broth, green onions, kikurage, and one thin piece of chashu. Maybe this was the most memorable because it was the first of five, or maybe it was because I’ve been eating Sapporo Ichiban instant noodles for too long, but I truly believe I could eat this every Sunday and never get sick of it.

Nana Sushi is at the top of the China Steps and kitty corner to The Vault Café. This was by far the heartiest bowl of ramen; it was tonkotsu. Tonkotsu by nature is a more filling broth and doesn’t need many toppings to make it so, however there were three slices of chashu, a soy-marinated egg and green onions. The amount of chashu and the inclusion of a luxurious soy-marinated egg gave this bowl a diverse flavour profile that wasn’t necessarily lacking in the other bowls, but added to its eating experience. This bowl I call the “luxury bowl” because of the price, $14.50, and the amount of flavourful ingredients. It matched with Nori for Instagramability. The traditional aspect of this bowl was easily fulfilled because of the salty and satisfying broth, the limited but large amount of topping, and the quality noodles. I couldn’t finish this bowl. I ate fast because I went in hungry; I gave away a piece of chashu, ate every last noodle I could chopstick, and couldn’t fit the last sip in. I wanted to tuck in to this bowl and take my time eating, which I will absolutely do on my next visit.

Umai Sushi is tucked away behind the North Town Centre mall. Fake cherry blossom trees decorate the interior, giving a year-round spring vibe. There are a couple round tables which are great for groups, and they also have two bar seating areas for the solo sushi eaters. Umai definitely advertises their sushi more than anything else on their menu, so their ramen options were limited. They only had miso ramen and it came with only one of the regular toppings: green onion. The soup broth was quite clear, similar to chicken soup. It had well-done slices of beef instead of chashu, and carrots, broccoli, and bok choy instead of the traditional toppings. Because of this, it did not earn top points for instagramablity. The thin broth didn’t hold up the toppings the same way the other bowls did, they were all mixed in with the both. This bowl was the most wallet friendly, costing only $11.99. It did, however, resemble chicken soup more than a hearty bowl of ramen. The best part were the noodles and the atmosphere.

Wa-Ku is at an unassuming spot on Bowen, next door to Trees dispensary and squished up against the Beaufort Pizza & Pasta House. I gifted their atmosphere a 5/5 because of their cozy booths. They’re set up perfectly for a two-person (or solo) ramen date. Even when the place is packed, the high backed booths keep noise travel to a minimum. Wa-Ku offers all four varieties of ramen; I went with Tonkotsu for the sake of comparison. The bowl received a 3/5 in the wallet-friendly category, coming in at $14. Its Instagramability was 4/5 with its bright pink pickled ginger and large square of nori. This bowl had great traditional elements by including an assortment of kelp and green onions. The only part I struggled with here was the noodles. I can’t put my finger on what was different about them, but it was the only bowl where I finished all the broth and left noodles at the bottom. They tasted more like soba noodles (similar to spaghetti) than the classic soft and wavy ramen noodle.

Nori was an easy win in the Instagramability category. I’ll admit that I ordered the spicy bowl to change it up and challenge myself, so the broth is more red than the other four bowls, but it’s obviously still a great bowl of ramen. It was $16, sinking it to rock bottom in the wallet-friendly category. It was advertised as having an egg, which did not make it into my bowl. Nori changed their menu recently though, which would have tempted me to give them a pass on the missing ingredient if the bowl hadn’t been the most expensive. Nori’s was the only bowl to include narutomaki and to have charred green onions, which added a lovely bitter and smoky kick to the broth. The chashu however, was wildly overcooked and dry, giving it a piecey texture rather than the satisfying tender and melty slice that we found at Nana and Bistro Taiyo.

Of course, this wouldn’t be a true ramen piece without a brief salute to instant noodles. I will not tell you where to get restaurant ramen, I just wanted to supply the public with a biased list. I will, however, tell you which instant noodles to buy. If the idea of leaving the house to get a bowl of sometimes expensive noodles is not your idea of a good time, there will always be instant noodles. But, please, don’t buy Mr. Noodles. At least have enough respect for your taste buds to get the Sapporo Ichiban brand. If you’ve never tried them, there is no time like the present.

Wallet-friendly: the cheapest bowl gets the highest score

Instagramability: how delicious will this look on my feed?