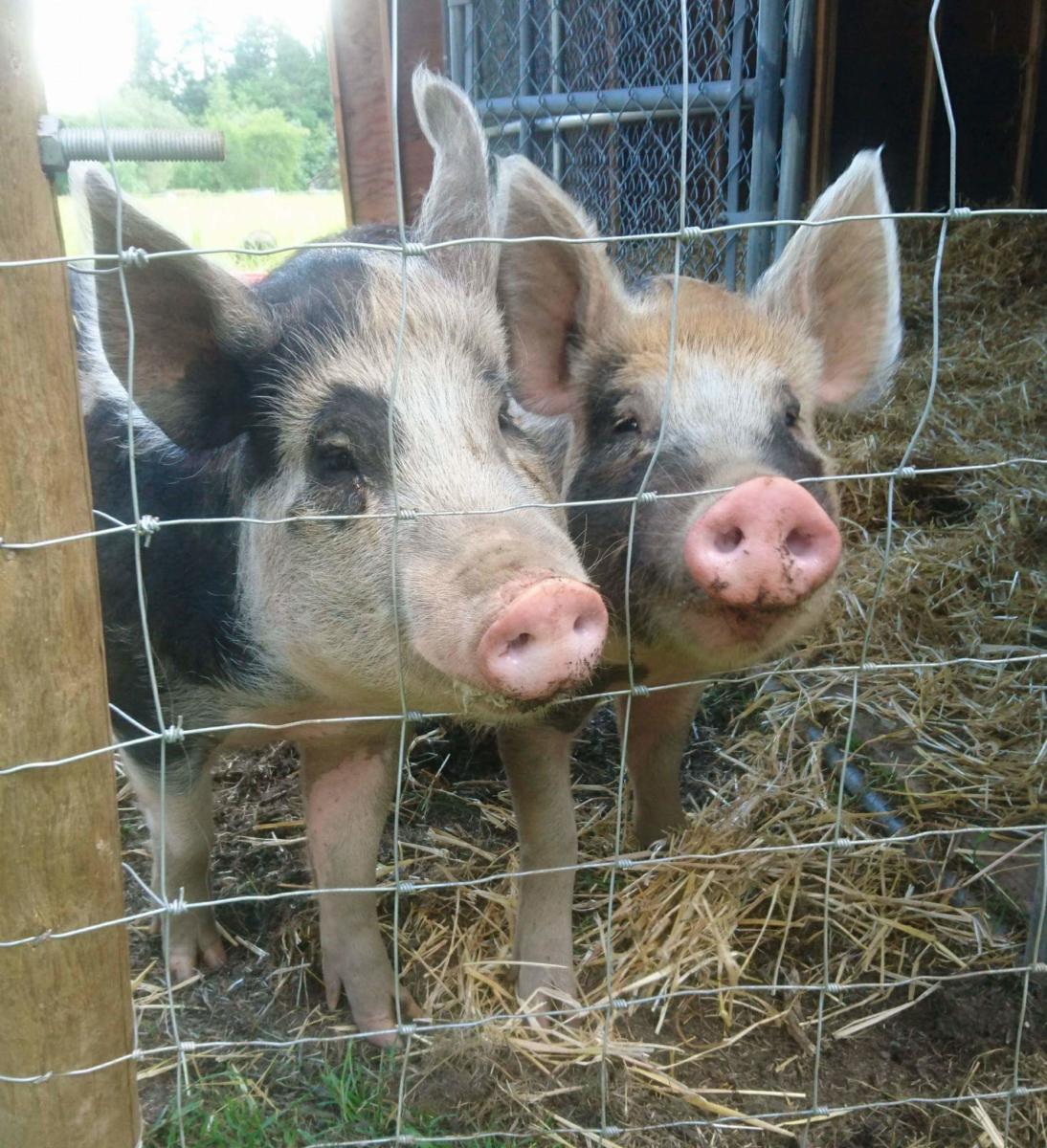 Tucked away at the side of Chemainus Road lies a farm that would appear to be just like any other. Secluded by trees, you may be able to spot some of the animals out on the field as you drive by if you look hard (and quickly) enough.

This is no ordinary farm, but the RASTA Animal Sanctuary. RASTA, which stands for Rescue And Sanctuary for Threatened Animals, was started by and is primarily run by Lucie Cerny, with the assistance of a crew of volunteers.

The sanctuary originated in De Winton, Alberta, just south of Calgary. Lucie noticed the lack of sanctuaries and advocacy for animal rights in the area, so she decided to take the plunge, and stepped up. She started with one rescue dog and evolved into the permanent refuge and safe haven that it is today. In 2015, she took on the laborious (and impressive) task of moving it all here to the island—every animal included—in order to embrace the milder climate and provide a better quality of life for the animals.

Since then, Lucie has become a pioneer for animal advocacy and rescue on Vancouver Island through her educational practice and involvement in local events and organizations. For example, she was a major source of inspiration for Michelle Singleton in creating A Home For Hooves sanctuary in Duncan.

Aside from caring for the animals, which is her main focus, Lucie considers education to be the most valuable tool in rescue network. RASTA offers the wonderful experience of guided personal tours at the sanctuary on Saturdays, in hopes that seeing the animals up close will ignite a spark and inspire compassion within their visitors.

After learning about RASTA through a friend and browsing their website, I was inspired to get involved and contribute to the cause. I’ve always been an animal lover, and who wouldn’t want to hang out with adorable pigs named Buddy and Piggy Sue?

I made the visit on a Saturday afternoon by myself, not really knowing what to expect. The weather was off and on with rain, but I came equipped in my new rubber boots (the attire they recommend).

At first glance, the sanctuary comes across as a bit unwelcoming. There are multiple “No Trespassing” signs plastered around the entrance, and the big metal gate that lets you in boasts a large white sign telling you to stop, read the sign, and wait for a volunteer to let you in at your scheduled appointment time. Very protocolled.

But as soon as I was let in I was greeted warmly by Lucie and two of the volunteers, Cam and Andrew. Benson, a sweet little dog and the sanctuary’s protector, also came by to sniff and say hello.

I signed the waiver, read the poster of rules, and was put to work right away. “Here’s your weapon,” Cam joked as he handed me a green shovel and sent me out to the field to scoop up poop.

I joined a lovely couple from Shawnigan Lake, Nicole and Bill, who had only volunteered at the shelter once before. We chatted as we tried to decipher the dung from the mulch, and watched the animals graze around us, taking the hoods of our jackets off and on again.

For them, it was a sort of happy coincidence. “I knew about RASTA back when they were still in Alberta, and I wanted to volunteer but it just never worked out,” Nicole said. “When we ended up over here, I contacted Lucie and she said she happened to have an available spot for us.”

The three of us laughed as Juliet, a large, grey potbelly pig, came up to our wheelbarrow full of poop and started rubbing herself against it, almost knocking it over. “They’ll try to do that,” Bill said as he rushed to hold on to the wheelbarrow.

What was most surprising was how fast the time went by—and how oddly meditative shovelling up crap is.

We went off the field and moved over to the pig pens. Two black pigs lay sleeping next to each other in the corner of their wooden enclosure, snouts pressed together. One of the other volunteers, also named Nicole, now instructed us and gave us new, smaller scoops with a dustpan.

“Have you heard the stories behind any of the animals?” she asked me as we scoured the perimeters of the pen. I shook my head and told her no.

She told me the stories of the two brown Jersey cows at the sanctuary, Ella and Eddie. Ella was a milking cow at a dairy farm who was surrendered instead of being sent off to the slaughterhouse. She was impregnated and gave birth many times in order to produce milk, but all her calves were taken away from her before she could even look at them. Eddie, a young calf from a different mother, was surrendered to RASTA a year after Ella; she embraced him as her own and they have been inseparable ever since. I could see the bond between them as I watched them eat next to each other, tails flipping around in the air happily as they occasionally looked up at each other.

The devotion and passion from the volunteers is infectious. Melody, who has been vegan for thirty years, commutes from Qualicum Beach every week and has never missed a Saturday. She moved to the island four years ago and found RASTA through a simple online search. She’s been with the sanctuary ever since.

Andrew has been volunteering at the rescue for two years now. He lives in Victoria, and is very active in animal advocacy groups such as the Vancouver Island Vegan Association (VIVA) and Voices for the Anonymous. He found RASTA after moving to the island and eagerly looking for a new sanctuary to get involved with. He had previously volunteered at a shelter on the lower mainland.

“It’s a great way to bond with the animals and build that connection. You [also] meet all sorts of like-minded people,” Melody said when I asked her why students should consider volunteering.

But if you can’t make the trip out to Chemainus, there are other ways we can help out, too.

“One thing we try to promote are monthly sponsorships,” Lucie said. “Either of animals themselves, or general contributions. We’ve got something called A Dollar a Day Sanctuary Support Challenge, a monetary amount of thirty dollars a month, that helps to provide ongoing care. But we’re not married to that number—if people want to donate five dollars a month, or even three, it really helps out.” They’re looking to expand their programs and offer more through education soon.

Promotion of veganism is another thing she emphasizes. For anyone curious and looking to make the switch to a vegan/plant-based diet, she lists the Vancouver Island Vegan Association as a great resource.

“There’s a lot of support there,” Lucie said. “And it’s a sense of community that they offer.”

If you’re inspired to help out, you can contact Lucie at <rastasanctuary@gmail.com> to inquire about volunteering or booking a tour. I highly recommend you do. You can also make a donation through their website at <rastarescue.org>.