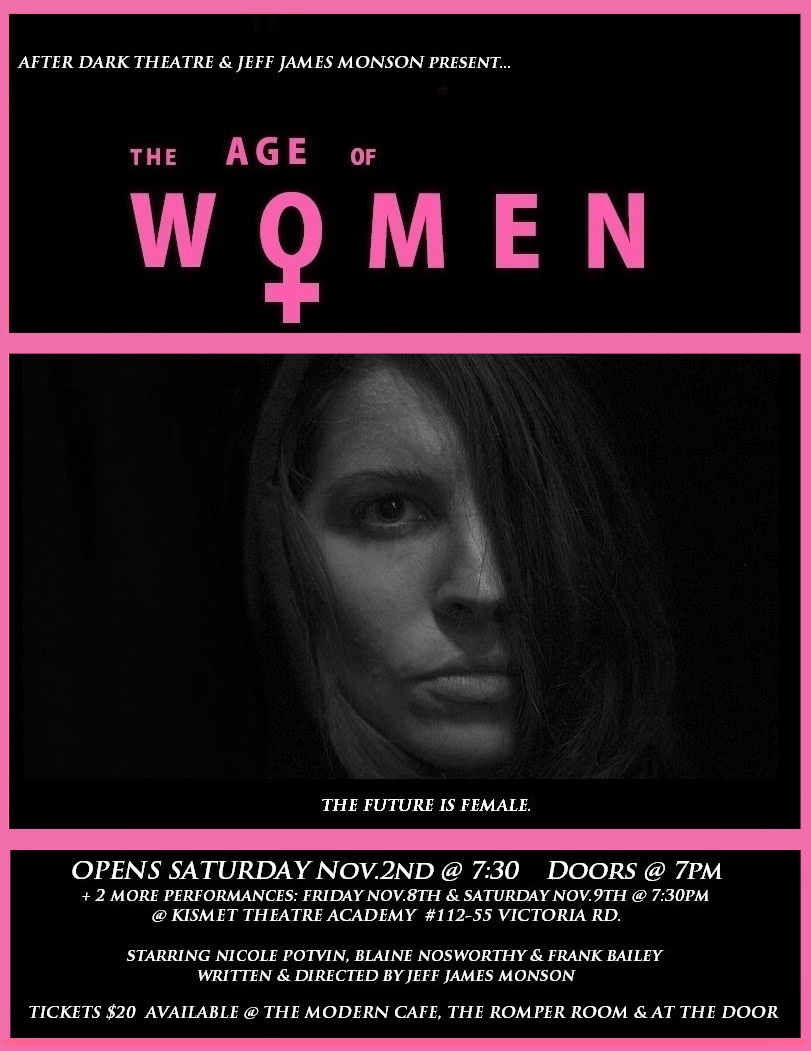 Jeff Monson’s first produced play is finally about to rise on Nanaimo’s artistic horizon, after months of anticipation within Harbour City’s art scene.

The Age of Women will be Monson’s debut in live theatre, leaving the writer, actors, and ticket holders excited and nervous for the premiere, as the ongoing rumor of the play’s radically themed story has left patrons within the city’s theatrical milieu on the edge of their seats.

“You can have great writing, great directing, great set design, and great costumes, but if you have bad acting, it destroys the whole thing for me, personally. So, I wanted to focus on the acting. We spent five months on the performances to make sure they were authentic,” Monson said in a face-to-face interview.

Monson and one of his lead actors, Frank Bailey, met up for an interview to give a little bit of insight into what is to be expected in the play. Actors Nicole Potvin and Blaine Nosworthy are the other two actors featured in this raw portrayal of human emotion in the face of annihilation.

The four have been rehearsing the play for almost five months on a voluntary basis. The play will have minimal props and set design in order to establish the focal point of the acting. Their technique for embodying the characters is through the means of method acting. Since Monson studied under Bonnie Catterson for five years in method acting, his intention for the rehearsals was to share everything he had learned with his actors.

The story is set in a future where 95 percent of the male population have died from a plague and Elena (played by Potvin), an excommunicated biologist, sets out to find the cure. On the way, she stumbles upon Paul (Bailey) and Axel (Nosworthy), two of the last males of that region.

While writing the play, Monson tried to stay away from the stereotypical tropes and archetypes that are seen historically dramatis personae.  The characters of Age of Women were created with identities that are layered with a wide spectrum of traits which confront the human experience.

Bailey describes Paul as your down-to-earth, average Joe good-guy. Monson explains that Elena and Paul share the same internal struggle within themselves, trying to find their inner strengths; whereas Axel has a lot of damage psychologically and externalizes it to the world and to the people around him. Blatantly sexist and a bully, Axel was almost completely based off the American president Donald Trump.

“I really wanted to showcase the absurdity and volatility of someone like that, so I used Axel as that channel,” Monson said.

Due to the dark nature of the play, Monson wanted to work with positive people so that when the rehearsals were over, the play’s content could be left behind, and regular life enjoyed with people who love to laugh.

“By knowing Nicole, Frank, and Blaine, I was like, ‘these three have all the same energy, they have that same light in them, where they love life.’” Monson said.

Bailey described his previous roles as an actor as being one-dimensional, involved with a lot of comedy. With Paul being more of a serious character, and through the practice of method acting, Bailey has discovered that he had to release emotions that he has suppressed since his adolescence.

“I sat there, and being surrounded by method actors, I had to pull something real from my life, trying to figure out someone I was angry at and I’m like, ‘I’m not really angry at anyone.’ But to find that anger in myself at something from way back when and release it—I can see why Jeff pulled positive people in there, cause I’ve never had to go into the darkness per se—at the end of those nights, my blood is boiling,” Bailey said.

This is Bailey’s first time performing live theatre and it has given him a new perspective on what being an artist means and what human interaction can be like.

Furthermore, Bailey said that his experience with Paul has shone a light on his humanity—learning about what he has repressed and what has and hasn’t been accepted. He describes the rehearsals as new, challenging, and refreshing, making each occasion a moment to look forward to.

Monson and Bailey met through Hub City, where Bailey sat as one of the Board Directors and Monson as one of the Co-Founders. After Monson saw Bailey’s work on a YouTube channel, he decided that Bailey was a good fit for one of the characters of the play.

“He’s brought me into the world of theatre which is new to me, which is super exciting and terrifying at the same time because it is so different from television as you don’t get to go cut, ‘okay, I want it this way do it again,’ you got to remember a lot more.” Bailey said.

Bailey started acting when he was 19, training with Jackie Casey of Spotlight Talent, which was more orientated to acting in television. His first opportunity was on the show Eureka, which ran for five seasons on the SYFY channel—formally known as the Space channel—where Bailey made the opening credits for the first season. In his real life, Bailey is a firefighter.

Monson is a writer, director, and actor based in Nanaimo. He co-founded Hub City Cinema Society and is a board member of Western Edge Theatre. He’s done freelance videography and has made seven of his own films, including two features.

Nosworthy is educated in acting from the Vancouver Film School and has also studied under Bonnie Catterson at Kismet Theatre Academy. He has acted in theatre and film for over ten years, appearing in Western Edge’s Hosanna and One Night Stand.

Tickets are $20, available only at the door or through Monson’s email, <afterdarktheatreco@gmail.com>.

Monson suggests that you buy tickets early since many will be buying tickets on the night of the event. Being that there are only 30 seats available, it would be a gamble to stand in the cold and wait for a ticket that might already have an owner.