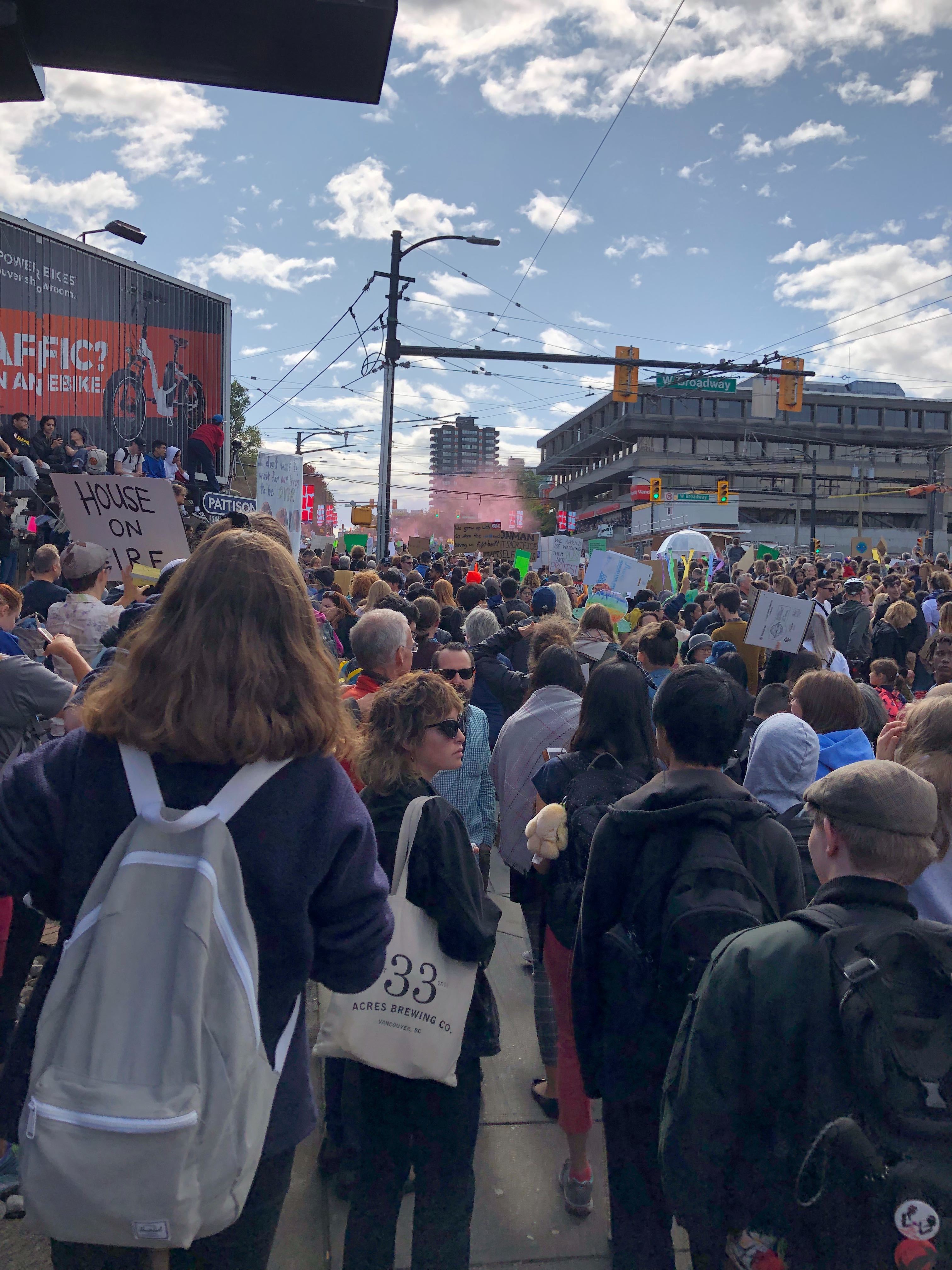 As the tail end of the climate strike marchers set foot on the Cambie Street Bridge, a leaflet slipped away from a young protester’s hands and danced away in the wind. While the head and body of the snake continued to march and chant through the busy streets of Vancouver, the rear stopped to admire the irony of the situation. Although there were several attempts to catch the prancing piece of paper, it was whisked away like the prospects of a sustainable future. At the peak of protester concern came a small miracle; the flyer descended onto a separate footpath bridge. It was as if the universe had provided a second chance to reverse our pollution of the planet. As several voices cried for change, the businessmen and women using the footpath pressed on with little attention to the protesters and the litter.

From September 20–27, millions of people around the world participated in the Global Climate Strike. On Friday, September 27, from 1:00 pm to about 5:00 pm, the Sustainabiliteens, a Vancouver local teen activist group, lead roughly 100,000 citizens from city hall on West 12 Street and Cambie, through the Cambie Street Bridge, all the way to Hamilton Street and West Georgia, to protest government inaction on the current climate crisis.

I made the trip to Vancouver the day before. On a whim, I decided to stay the night in Vancouver to visit friends and family. In a discussion about climate and politics, I referred to an email I had received from VIU’s University Relations about the upcoming Global Climate Strike in Nanaimo. It was then that my host had informed me of the strike in Vancouver.

Approaching noon on Friday, my host and I left his house. He said he would help me navigate home to Nanaimo as he made his way to the University of British Columbia (UBC). If you’re a small-town kid like me, then you’ll know how daunting of a task it is to travel in the big city. As we rode the bus, a teenager cutting class made an announcement about the climate strike. When she finished, I overheard her tell her friends that she didn’t care if she embarrassed herself. This brief public service was the turning point in my decision to participate in the march. There was a clear shift in interest; people seemed passionate about this cause. I knew then that I couldn’t miss the event.

As we hopped off the bus, my friend and I found ourselves in a flurry of people eager to make their way to city hall. Street performers sang and rapped about the Climate Strike, as hundreds of people waited in line for buses, several holding signs about climate. Multiple buses arrived for the single purpose of bringing people to city hall. Only one in every five or so of the buses arrived to drive its usual route. Transit employees positioned themselves at a door of each arriving bus to assist those boarding, with priority for those with disabilities and baby strollers. The buses took as many people as possible.

Eventually, I got on board a bus and split ways with my friend. Navigating had become much easier—all I had to do was follow the crowd. The group beside me noticed that the bus was far off course. The driver made an announcement: his higher-ups had told him to take us to the Cambie Bridge and let us walk the rest of the way. The reason was clear when we exited the vehicle; the streets from the bridge to city hall were flooded with people.

Several people wore costumes, and many carried signs made of recycled or recyclable materials that employed humour through popular culture references or meme culture. All of the signs, however, criticized how the approach to the climate crisis has been thus far.

As I walked towards city hall, people in cars cheerfully honked in support of the event and its participants. The general tone of the crowd was positive, despite the gravity of the crisis. The atmosphere was welcoming, and in spite of their motivations, everyone seemed to have the same goal. Although all walks of life were represented, there seemed to be a clear white majority.

Coming from a First Nations background, I have been raised on the losing end of an ongoing battle to protect and maintain natural life on the planet. Participating in the event provided a unique moment of sublimity. It seemed as though there was a clear turning point in this battle that my people have been fighting since first contact. Although I was visibly a minority, I felt welcomed.

The strike took place on unceded Coast Salish territory of the Musqueam, Squamish, and Tsleil-Waututh, yet there was little First Nations representation. As I watched thousands of people march down Cambie Street, I spotted a single eagle feather above the crowd, grasped in the hand of Misty Fredericks, a mother of two from the Oneida and Mohawk Nation in Ontario. Fredericks protested with her daughter Angelina at her side, feather in one hand, and a rattle in the other.

Fredericks said she was almost brought to tears when she first arrived. “These are the people we have been waiting for,” Fredericks said. “Climate change doesn’t just affect one individual group of people, it affects all of us. It affects the whole entire planet, so it’s great that everybody is coming, from all different nations.”

Moreover, Fredericks mentioned how her daughters’ futures depend on movements like this, and that her children have to think hard about having children of their own; at the current rate of things, there may not be a planet for Fredericks’ grandchildren.

“It was important for me to come today to support all the youth that are here.” Fredericks continued, “The youth is our future, and we need to show them we have their backs, that we support what they’re doing, so today we march with them in solidarity.”

As Fredericks and her daughter marched on, I stopped at the foot of the Cambie Bridge. I took a seat on a cement barrier and watched as people passed through the bridge like salmon to spawn. Here, I was accompanied by Grey Gunther, father of three, who said that, as a parent, events like this give him hope.

“We have to work together and cooperate,” Gunther said, “People started to think of what we have in common. We need clean water, food, and shelter to survive. It’s scary to think of the future.

It took approximately an hour and a half for the entire crowd to pass through.

“There’s a war going on,” Gunther continued. “This could get pretty serious.”

I finally rejoined the march from the tail end of the group, which became less structured, and less claustrophobic. Eventually, a sign caught my eye; it read, “Ask A UBC Professional.” I spoke with Hugo Tello, a UBC Geographer.

Tello said “We are demonstrating that there are a lot of people that want this change. It is very important to change the mentality of people over time, but that can take thousands of years, but we don’t have that time. That is why we have to protest; to tell the government we are here, and we need solutions right now,”.

Aside from changing policies, Tello said if we reduce our meat consumption, our birth rate, and switch to electric vehicles, we can reduce our individual impact on the planet. Essentially, we need to be more mindful of our consumption.

“People are doing great,” Tello said. “If I wouldn’t have studied [Geography], I would probably not be here. Maybe I would think [the Climate Crisis] is a conspiracy. But it is amazing that we have so many people from different fields that are still strong believers in this, that are still supporting the cause.”

As we made it across the bridge, faces and signs became a mixture of familiar and new; several people joined the march from various different streets. Some people collected waste off the streets as they marched on. Onlookers could be seen from nearly every skyscraper the protestors passed. Some unlucky drivers were forced into spectating as they found themselves blocked in at various intersections. Granville Street had a row of buses lined up seemingly as far as the eye could see.

Soon after, I learned I wasn’t the only out-of-town supporter; I spoke with Nanaimo native David Kin, a doctor at the Vancouver General Hospital.

“It’s 2019, and I remember David Suzuki’s daughter making that famous speech. It’s been thirty years since that, almost; if you look at statistics and policies, there hasn’t been that much change,” Kin said. “I think we just really need more social activism like this because it’s important to the next generation. Policymakers of the current generation aren’t doing enough, and this is our way, the young generation, to show that we care and this is an issue that impacts our daily lives and our future.”

Although the initiatives of the event seemed fairly clear, there was a political undercurrent that often reached surface level. Several attendees of the event wore Green Party T-shirts or used their signs as mediums of support. Several took the opportunity to spread awareness of various political campaigns. After receiving a hefty pamphlet of the Communist agenda, I spoke with Kimball Cariou, the Communist Candidate representing Vancouver.

The pamphlet I received suggests the Communist Party will put “People and Nature Before Profit.”

The public speakers that concluded the event were gentle in their approach to politics. They implored that the younger generations do some research, and actually make themselves available to vote in the upcoming federal election, without making any suggestions on who to vote for.

Beyond elections, the political also took to matters of diversity. Although the climate crisis is unbiased and impartial, marginalized communities have little societal influence and minimal resources available to approach and survive the symptoms of climate change.

In the mass of people, a young woman handed me a circular then disappeared without sharing any information on the supplier. The notice suggested: “Oppression within our movements needs to be anticipated, acknowledged, and addressed. Otherwise, we will continue to perpetuate the very issues we claim to fight against and be complicit in the subjugation of marginalized peoples.”