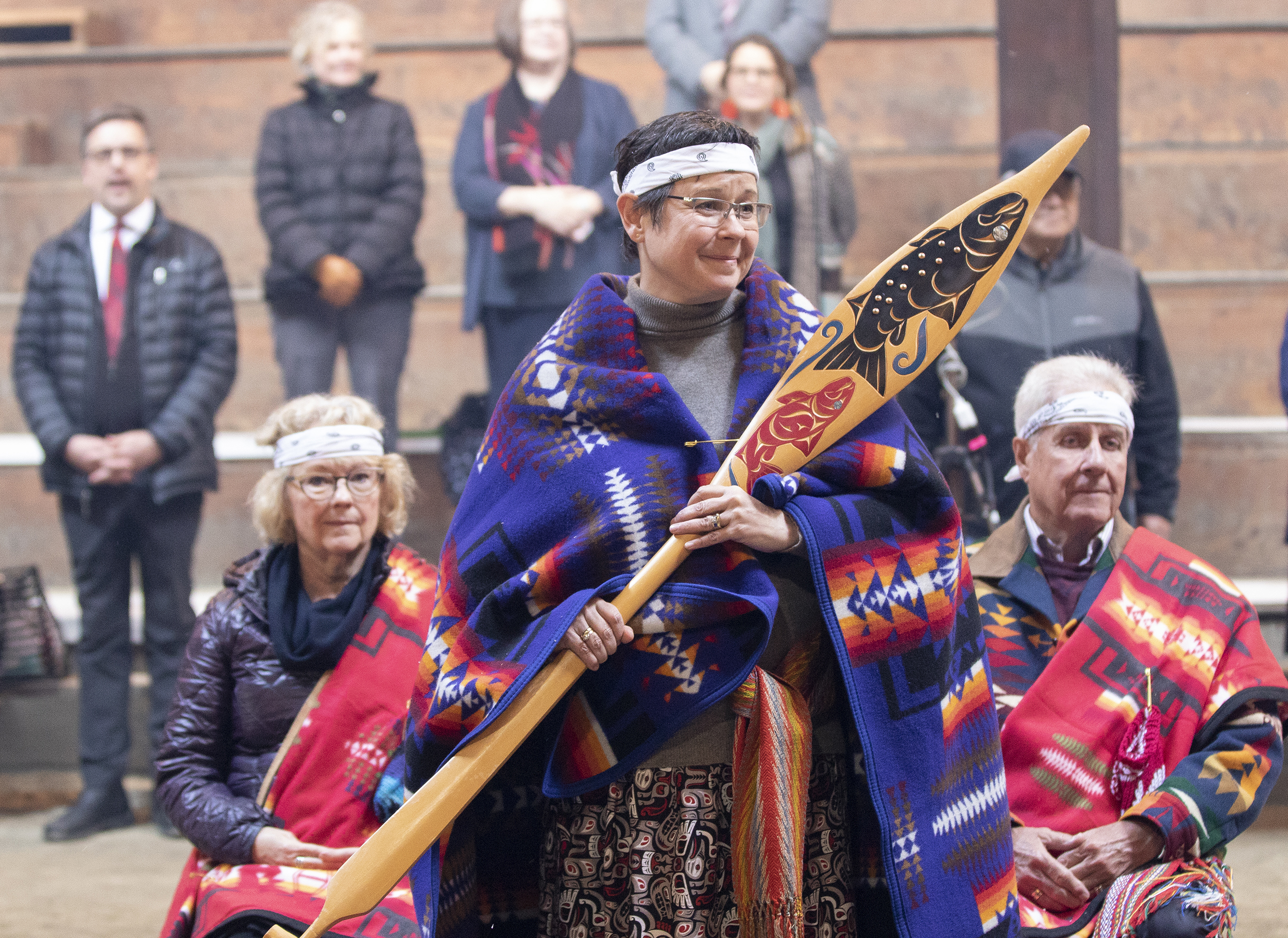 Dr. Deb Saucier, the new VIU President and Vice-Chancellor, was bestowed the powers and responsibilities of office on November 15 at the Snuneymuxw First Nation Longhouse in Cedar.

At her installation ceremony, the previous president of MacEwan University presented her contemporary and revolutionary vision of what she hopes to accomplish in her five-year term as President. Dr. Saucier proposed that VIU is the type of university that can, and already is, breaking the conventional archetype of who can participate in post-secondary education and how the key to a successful community is inclusion.

“I am struck by the common belief that ‘good’ universities are those that are exclusive. Think about what that means, excellence is defined by who you exclude. But what if we turn it on its head, and thought instead that excellent universities where those that invited everyone in. That excellence was defined by how well the members of our community succeeded, not by how many were weeded out.” Dr. Saucier said.

Her audience was composed of approximately 350 VIU employees, community members, government officials, and invited personnel from other post-secondary institutions.

“It’s kind of a radical idea isn’t it? To turn a university on its head and define excellence as inclusion and success. And VIU is that kind of university and we are committed to inclusion and promoting the success of our people, our communities, and the Nations we serve.” Dr. Saucier said.

All attendees sat under the open-roofed Snuneumuxw Longhouse, where Dr. Saucier noted that VIU has had a recognized and respectful relationship with the hosts and that by its very nature, the relationship is a testament to the university’s commitment to working with the communities it serves.

“At VIU, we not only take our work to the classroom, we bring it to our communities and in doing so we work with our communities in making it better to solve problems, big and small,” she said.

Snuneymuxw First Nation member Darren Good—who also served as the Shqwi qwal (or Speaker)—stated that this installation ceremony was the first time in the history of his people that an occasion of this sort has ever been held at the Longhouse.

The ceremony embodied Indigenous traditions, as VIU and Snuneymuxw collaboratively hosted the event, upholding such protocols like the calling of attendees to share their experience with their home communities, and asking speakers to present their reflection on the value of the occasion.

Snuneymuxw First Nations Chief Wyse Xumtilum confirmed that the participation of both hosts represents the commitment that VIU and Snuneymuxw communities’ are walking together.

“We’ve come together in a good way and we want that relationship to grow,” he said.

Makenzie Leine, Chair of VIU’s Board of Governors, and Louise Mandell, QC, VIU Chancellor, joined the speakers with reading of a pledge and placing of the robe and stole on the president.

Leine explained that the board is responsible for hiring the president through a careful and deliberate procedure  where the Presidential Search Advisory Committee—made up of students, employees, board members, and others—made their recommendations and the selection operation of VIU’s new president resulted from this collaboration of ample parties.

Mandell said the whole event was a step in the progressive process of education and reconciliation.

“We draw from the wisdom of Indigenous laws and traditions that instruct us to ask how our actions today will impact generations into the future,” she said. “This day is part of VIU’s evolution and growth. Deb is a role model—she offers testament to the idea that it is possible to overcome invisibility, the bias of patriarchy and colonial barriers, get an education and lead a university. Others will look and say, ‘If she can do it, so can I.’”

With the roof opened to the sky and the gentle snowfall making the ceremony deservedly picturesque, Dr. Saucier reminded the audience about the transformative power of education.

“Education is the key to a good life and at the heart of what indigenous peoples are asking for. The nations understand the power of education to transform their peoples and assure autonomy for their communities. And I commit to you that I will listen hard to what is said and to the silence between the words to what is not said.”

Dr. Saucier completed an International Baccalaureate diploma at Lester B. Pearson College of the Pacific (1985), Canada’s United World College in Metchosin, BC,  before going on to the University of Victoria where she completed bachelor’s (1988) and master’s (1990) degrees in psychology.  She earned a PhD in psychology (1995) from Western University in London, Ontario.

Between 2011 and 2017, Dr. Saucier was dean of science and later provost and vice-president, academic at Ontario Tech University in Oshawa, Ontario. She served as president of MacEwan University in Edmonton from 2017-2019.

Read here for The Nav‘s interview with Dr. Saucier.