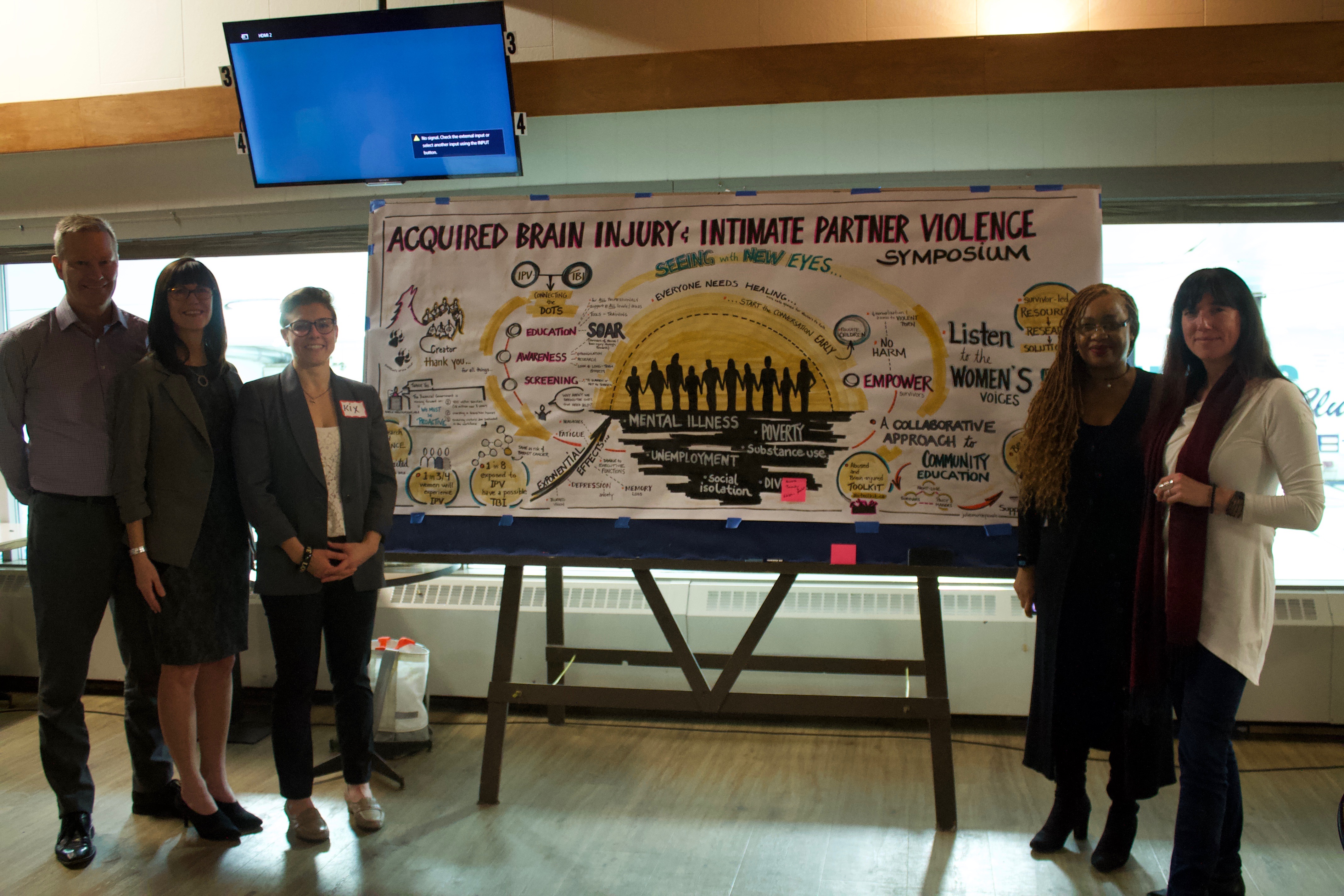 On Thursday, January 30, I was able to attend the first Intimate Partner Violence (IPV) and Traumatic Brain Injury (TBI) conference in Nanaimo. The event was intended to educate the community, and to my astonishment, I learned that IPV research is stunningly emergent and in its infancy.

I first became aware of this event in August 2019, when I was in discussion with Kix Citton, the Executive Director of the Nanaimo Brain Injury Society (NBIS), about future stories and events for The Nav. She immediately told me about this event, at which revolutionary research in IPV and TBI were to be conjoined in the hopes of making society understand that domestic violence is a lot closer to home than thought. Then, she gave me a stat: for each NHL player who suffers a concussion during the hockey season, approximately 7000 Canadian women suffer the same injury due to intimate violence (research done by University of British Columbia Okanagan Professor Paul van Donkelaar). A devastating fact, but one that needed to be shared.

Before getting into some of the data that was presented at the conference, it must be known that research into TBI due to IPV is very complex and has limited support. There is a lack of funding, social programs, and judicial intervention when it comes to educating, preventing, and supporting IPV victims and offenders. The presenters made it clear that they could not give answers as to why this malady in human connection happens, but they could start a dialogue. People from all over mid-Island came. I sat at a table with four women, social workers, from Powell River.

The conference was held at the Nanaimo Curling Center from 9 am–4 pm. The presenters consisted of four pundits on IPV: Halina (Lin) Haag, a PhD candidate at Wilfrid Laurier University’s Faculty of Social Work; Karen Mason, Co-founder and Director of Community Practice for SOAR (Supporting Survivors of Abuse and Brain Injury through Research); Dr. Paul van Donkelaar, Co-founder and Principal Investigator for SOAR and professor in the school of Health and Exercise Sciences at the UBC; and Nneka MacGregor, co-founder and Executive Director of the Women’s Centre for Social Justice. Two of the presenters disclosed to the crowd that they are a survivor of IPV or TBI.

Haag was the first to begin the conference and her data revolved on female survivors of IPV with resulting brain injury, such as, exploring factors influencing mental health, return to work, and social inclusion. She noted that one in three women in Canada will experience IPV in their lifetime, while for men, the ratio is one in seven. She also mentioned that this research is scaled on a binary spectrum, acknowledging that the structure is flawed and that the reality is “much more fluid and complex.”

Over 90 percent of violent encounters from an intimate partner will include hits to the head, face or neck, and/or strangulation. TBI victims have higher rates of mental illness, unemployment and homelessness, divorce (particularly if the woman is injured), substance abuse and criminalization challenges, and are more likely to experience poverty and become more socially isolated. Victims also face a confrontation of credibility as the label of being brain damaged can draw skepticism. The heavy burden of a recurring brain injury is the exponential factor; essentially, the effects of injuries get compounded every time they occur.

Karen Mason and Dr. Paul van Donkelaar presented together as they both co-founded the SOAR program and have a history with the Kelowna Women’s Shelter. They began by saying that 6,000 women and children in Canada seek refuge from IPV in women’s shelters, and many get turned away due to lack of space. As they continued, the statistic that Citton originally gave me in the summer was updated, saying that in the NHL there are 38 players that suffer concussions per year; therefore, for every NHL player that suffers a concussion, more than 5500 Canadian women will experience that injury every year.

Within their research, they also drew a comparison between IPV survivors and athletes that suffered a brain injury and discovered that IPV victims had more symptoms a year after their episode than the young athletes did within three days of their injury. In continuation, repeated traumatic brain injuries that result in chronic symptoms will likely have long term consequences.

At the end of the conference, I interviewed MacGregor, Executive Director of the Women’s Centre for Social Justice (also known as WomenatthecentrE), a non-profit organization developed by and for woman-identifying survivors of all forms of gendered violence. Most of the members have experienced violence from the hands of an intimate partner, including not only physical but also sexual, financial, and emotional violence. Members participate by using their lived experience to navigate and bring about change in the system, raising awareness in society, and engaging in peer support.

This movement towards building a network for female survivors is global and the organization has roughly 3000 members around the world. These united women are collaborating to bring about change in the system, innovate practical steps that offer options to the research fields, policy reforms and general advocacies, and pushing for community awareness. The work is structured in what they call “portfolios.”

“There is a portfolio that deals with family law and family law-related issues. A portfolio with criminal legal system, sexual violence, child welfare, research and education, shelters. [And] a portfolio about engaging men and boys and ending violence about women,” MacGregor said.

The non-profit was incorporated in 2008, but MacGregror started her advocacy in 2003–2004 when she separated from her ex-husband. As a survivor, she realized that the supposed systems deemed to be pillars of justice to support and protect women and children from violence were places where violence was perpetuated.

“The systems, because they didn’t support women in the ways that we were meant to be supported, actually encouraged men, abusive men, to escalate their violence,” MacGregor said.

Furthermore, she said that while Canada has well-meaning laws around victim support and perpetrator accountability, the accountability of the justice system is not serving the community as it says on paper. In reality, women are not protected and perpetrators are continuing to bring violence on their partners. Through her navigation of the system, she realized that something needed to be done to generate awareness and make them do, “what they bloody well are supposed to be doing.”

Towards the end of our interview, I asked MacGregor how students could play a part in this advocacy, acknowledging that our next chapter in life is along professional lines with the potential of starting a family. She outlined three aspects that students should consider to uphold change: 1) identify friends and colleagues that are experiencing this type of violence and find ways to support them; 2) explore what to do if your friend is committing this type of violence against their intimate partner; and 3) explore how to engage in this conversation and change fundamental behavior.

MacGregror also offers training on dating violence and identifying signs, teaching practical options of what to say and do when a negative situation presents itself. She states that victim blaming and shaming are dialogues that should never be used, as they make the victim or offender shut down and not acknowledge the consequences. Secondly, she said that students must realize we have the capacity to create the world we want to live in; it is an acknowledgment that we are all directly impacted by these circumstances as we have mothers, sisters, cousins, and brothers, that all deserve a life free of violence. The third and last strategy is to engage courageously in misogynistic conversations, and advocate that prejudice against women is something profusely wrong.

“I’m talking now to young men. When you are able to see the other persona as a human being that is entitled to the same rights and privileges as you have, regardless of your gender identification, when you’re able to come into spaces with love in your heart and look at other people with love in your heart, that’s when things really start shifting. It sounds so cheesy but it’s true, it’s honestly true,” MacGregor said.

She ended by saying that the event was brilliantly done and though she was exhausted, the day was genuine and educative, with people willing to be vulnerable in order to draw from their power of experience as survivors and create a community of connection.

On Thursday, February 27, a follow-up event will be held so the community may reconnect once again to review the recommendations and evidence from the voices that appeared among the table discussions at the end of the conference. The goal is to discuss how people can take the next step and create a plan for a change in policy and practice within the community.  The event is at no cost and will be at St. Paul’s Anglican Church from 9 am—1pm, with lunch provided. Seats are limited, register at <ipvandabiday2.eventbrite.ca>.