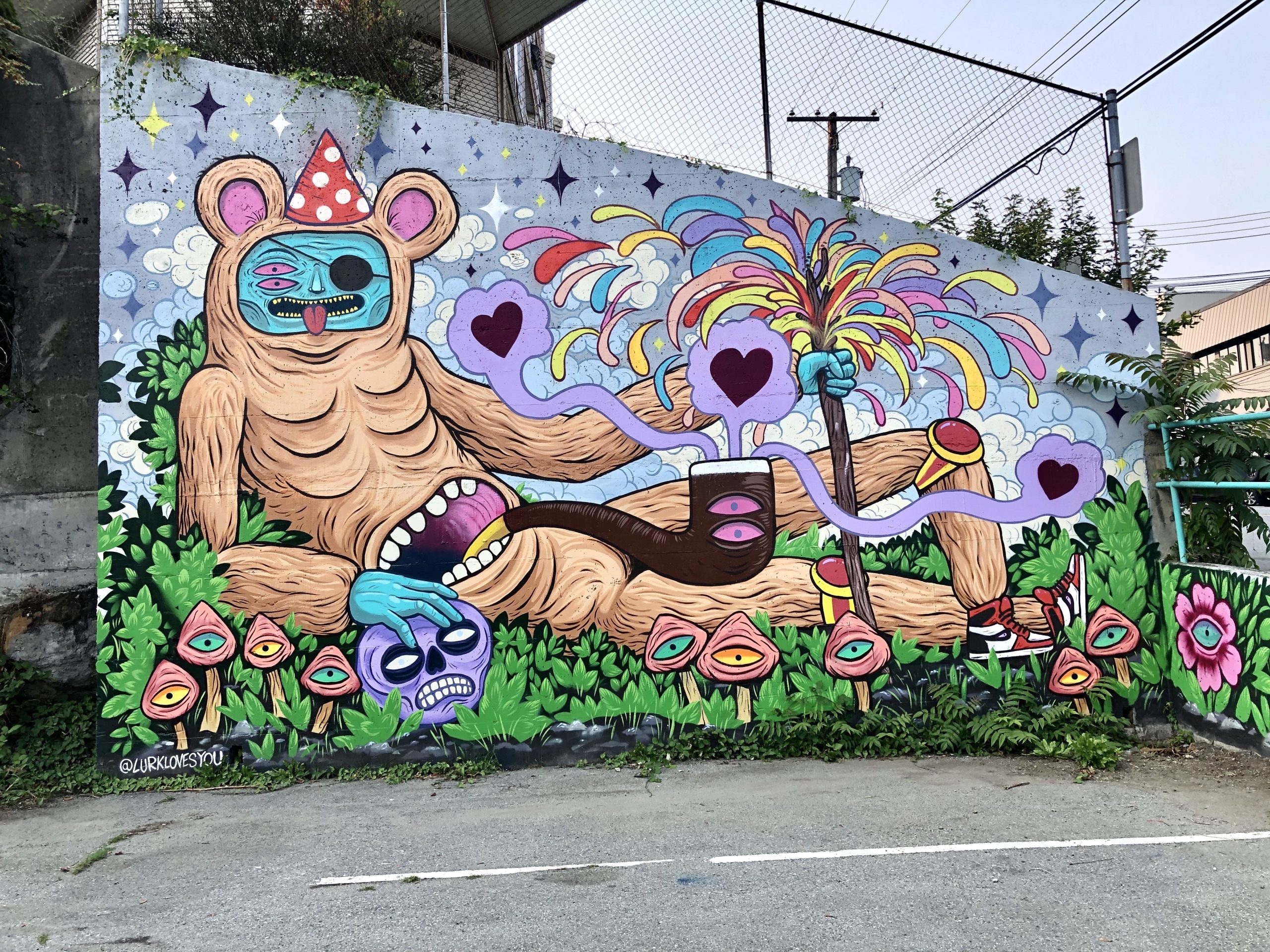 His artwork is reviving the city, with ample amounts of colour and sass.

“It’s a gift to Nanaimo. I see people going out of their way to come and see it, including families and children.”

Street art has always been highly criticized, feared, and polarized by communities around the world. Maybe because it’s “out there” for everyone to see; maybe because it evokes newfound emotion and conversation—who knows? In my mind, it allows a person’s creativity to bring life to a previously mundane wall or building. Street art is instrumental to the culture and well-being of urban areas, such as Nanaimo, and their residents. It keeps people enthused and inspired, especially in times of hardship.

Russ Morland, the local artist known as “Lurk,” has been living in Nanaimo since 2000. “I came from England and have always lived in bigger cities with lots of diversity,” he said. He has recently created a mural in downtown Nanaimo on 95 Cavan St.

When asked about the inspiration for his mural, he said, “It’s simply one of my recurring characters that I’ve been doing for years. The sketch was originally standing up, but when I was allotted the space [by the City of Nanaimo] I had to make the character lay down. My art has no meaning to it beyond just being fun, weird characters; it’s the lowbrow sensibility that has been symbiotic with fantasy art since the ’50s.”

Lurk believes his art is there to be a distraction in all the best ways. Ever since he was a child, he enjoyed creating weird worlds and characters to take him out of reality. Maybe that’s what art is about—helping people step out of the reality they are in and into something lighter and more fun.

The City of Nanaimo Culture and Environment website states that, “Public art is art that is accessible to all. It has the power to energize public spaces, promote thinking and debate, and celebrate an area’s past, present or future.” And that is exactly what Lurk has done. His artwork is reviving the city, with ample amounts of colour and sass.

“When I was a kid, I would be more into illustrating things like record covers and characters. Then I got into abstract and cubism for 10 years. I started to mix the two styles, and that’s where Lurk was born. I’ve been refining it over the years and now I’m so happy with where it’s at and where it’s going,” Lurk said.

Brandon Marcotte, a Nanaimo local and full-time student at VIU said, “The mural brightens up the downtown area and it would be cool if downtown Nanaimo was covered in pieces like it.”

Willow Friday, an employee at Iron Oxide located directly across from Lurk’s mural said, “It’s a gift to Nanaimo. I see people going out of their way to come and see it, including families and children.”

Product Care Recycling is a Canadian-based company that believes murals are important to society for three reasons: they create important conversations and new ideas; encourage you to slow down and admire your surrounding area; and create vibrant neighbourhoods that people want to visit, live in, and take care of.

Lurk said, “We need to live and move into the future when it comes to public art, as there are many voices and artistic styles that need to be heard. We are a melting pot, and murals can represent that.”

Selly Naouma, a master’s student of photography at the Royal College of Arts believes street art “is a playful and childish way to stick it to the system.”

“[Street art] is intuitive and fun,” she said. “It brings the artist back to their roots and their childhood of self-expression where they can physically use paint on brick, rock, or concrete instead of pixels on a computer screen.”

Creating public murals can be an expression of freedom of speech for many people. In some instances, it’s an ability to speak on the socio-economic issues of a city and create conversation in the neighbourhood—or maybe it’s just to add a splash of playful colour to a grey space.

People might be threatened by public art because it sparks conversation, but what kind of world would we be living in if we couldn’t express ourselves freely? We are living through a pandemic in which everything feels uneasy, so let’s choose to be enthusiastic about our local street artists. Let’s use this as a vehicle for positive change in Nanaimo.

You can check out Lurk’s artwork on his Instagram page, @lurklovesyou, and purchase his works from his website. He also sells printed clothing for men, women, and children. “His work ranges from detailed, psychedelic paintings and illustrations to digital drawings,” his website states.