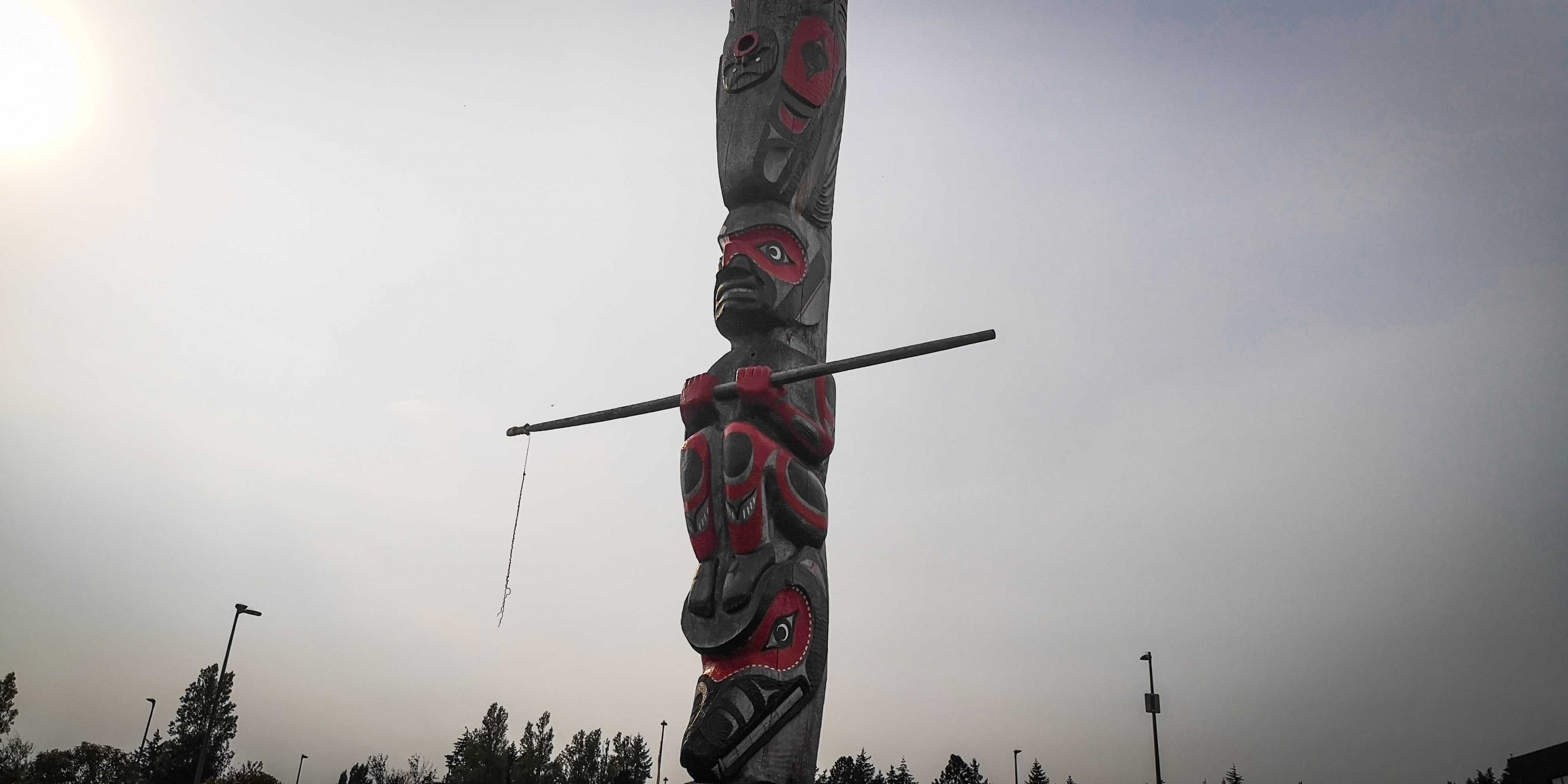 The photo frames Heeshka a tlaquiaht, a whaler who is holding a wooden harpoon. The pole is brown with red and black designs which shape the images / Image via Carrie Davis

“This has been the attitude, unfortunately, of the BC government—that they have been, you know, trying to set us aside and they make decisions on our behalf without even talking to us”

“It’s really scary. And I think people just need to keep making sure the government is accountable and continuing to meet the needs of the Nuu-chah-nulth.”

The Nuu-chah-nulth Tribal Council (NTC), representative of 14 nations on the Northwest coast of Vancouver Island, is working alongside Heiltsuk First Nation and the Tŝilhqot’in National Government, which represents six nations, to call on the Ministry of Health for what they say is crucial information.

Shortly after the province moved into Phase 3 of the BC Restart Plan, fears of a COVID-19 outbreak remained. Many nations reached out to the provincial government for help.

NTC President Dr. Judith Sayers is concerned about how quickly the virus could spread in her tribe.

“We have so many vulnerable people—our elders, people with different health issues—and we know how quickly it can spread. And so, [I am] definitely very concerned about an outbreak—even just getting one case in the community is of great concern,” Sayers said.

When the pandemic started, the tribe approached the BC government in an attempt to have safety conditions met.

The collective is now asking for more rapid testing kits for their nations. NTC were only given one testing kit, despite representing 14 individual nations.

“When we first started this, we didn’t even have the one rapid testing kit,” Sayers said.

The nations want to be able to screen people coming in and out of their reservations—not just for the sake of the reserves, but also the territories around them. They are also seeking more culturally sensitive training for contact tracers that will have to come into the communities when any outbreaks occur.

Along with the other conditions, the three groups are asking to have more information on confirmed COVID-19 cases in communities that are in close proximity to their reserves. Sayers said it is important to have this information so that if an outbreak happens in a community near the nation, they can update their protocols to keep everyone safe.

With escalating conflict between the provincial government and the nations in the pursuit to have COVID-19 information shared, NTC, along with the Heiltsuk First Nation and the Tŝilhqot’in National Government, filed a complaint to the BC Information and Privacy Commissioner on September 14.

“As we’ve had absolutely no cooperation from the BC government, we have now launched an application with the office of the Information and Privacy Commissioner challenging BC’s refusal to give us any information,” Sayers said.

In the complaint they made with legal counsel, the group said that the government’s refusing to disclose the location of COVID-19 cases in nearby communities violates section 25 of the Freedom of Information and Privacy Protection Act, which states:

Whether or not a request for access is made, the head of a public body, must, without delay, disclose to the public, to an affected group of people or to an applicant, information, about a risk of significant harm to the environment or to the health or safety of the public or a group of people, or the disclosure of which is, for any other reason, clearly in the public interest.

In this case, Minister of Health Adrian Dix acts as “the head of [the] public body,” as he has the power to approve or deny what the tribes are asking for.

When Dix was questioned on this file to the commissioner during one of his healthcare service announcements on September 15, he said, “Just yesterday I met with First Nations leaders that we have worked with, First Nations communities, and communities across BC to address community transmission when it occurs. I think that First Nations governments are doing an extraordinary job working with us.”

He says the issue is an important one, and that he is going to continue working with Indigenous communities to ensure First Nations communities get what they need.

“It can be a challenging thing at times, but I think everybody’s doing a good job,” Dix said.

When asked if she was invited, as an Indigenous leader, to Dix’s meeting, Sayers said, “No, he didn’t invite me … I don’t believe he invited any of the three nations that have been so vocal about COVID-19 and our needs. I don’t know who he met with.”

When asked which “Indigenous leaders” Dix met with, the ministry did not respond.

“This has been the attitude, unfortunately, of the BC government—that they have been, you know, trying to set us aside and they make decisions on our behalf without even talking to us,” Sayers said.

The BC Information and Privacy Commissioner, Michael McEvoy, said he will be looking into the complaint against the Ministry of Health, and said a written hearing will be conducted. The complaint will be made up of written submissions from the Indigenous councils as well as the Ministry of Health. The final date for submissions will be October 22, but no date for a decision has been decided.

While the case is open, McEvoy said he will not be providing any comments on this case.

During this call for action, COVID-19 case numbers keep climbing; each week brings a new record-breaking number. Outbreaks are already popping up in Indigenous communities around the province and close to Vancouver Island.

The village of Alert Bay declared a state of emergency early in the pandemic that lasted from April 18 to May 9. The isolated Cormorant Island put curfews in place and restrictions on ferry travel to and from the island.

The outbreak resulted in the death of one elder from the ‘Namgis First Nation. Provincial Health Officer Dr. Bonnie Henry said in a press conference that this was the first COVID-19 related death in a First Nations community.

“It’s a tragedy for all of us. Our elders, in particular, in our First Nations communities are culture and history keepers. When they become ill and when they die, we all lose,” Henry said emotionally during her press conference.

NTC is doing everything they possibly can while on their own to make sure an outbreak does not happen on their territory.

“Each of the 14 nations are doing their own preparations, their own protocols. Many did not have pandemic type emergency plans—everyone has those now,” Sayers said. “Most of the communities are still cut off to the public; you can’t come in and out unless you’re a member of the community.”

Some of the nations in Nuu-chah-nulth are struggling to prepare for a second wave, as they live in more remote locations and have a much more difficult time getting access to testing.

“We have very remote communities, and the number of hours they have to travel to go get tested is really long, and of course … you’re also exposing people while you’re doing that. We just need to find ways to get supplies to our remote communities,” Sayers said.

She expressed her anxieties about some of the remote communities that have less access to medical supplies, and are not as prepared for a second wave of the virus.

Sayers said that some communities’ closest respirators are hours away, or that they only have one to share between an entire community. “I know Tofino has like, what, 20 hospital beds? I don’t think we’ve really prepared our communities enough for if there is a second wave, or if we are in the second wave, as we see the cases just soaring every day.”

Sayers said the effects of the COVID-19 pandemic have been difficult on the nations, including the harm that a lack of large group gatherings has brought to the community.

“So many people are feeling disconnected to our culture, because, you know, we can’t have any of our feasts which would normally have anywhere from 500 to 1000 or more people, and you know, being able to hear the songs and yelling, you can sing in small groups, you know, that sort of thing,” Sayers said. “It’s really scary. And I think people just need to keep making sure the government is accountable and continuing to meet the needs of the Nuu-chah-nulth.”

“Everybody says, ‘We’re all in this together,’ but you know, we haven’t been acting enough like that,” Sayers said.