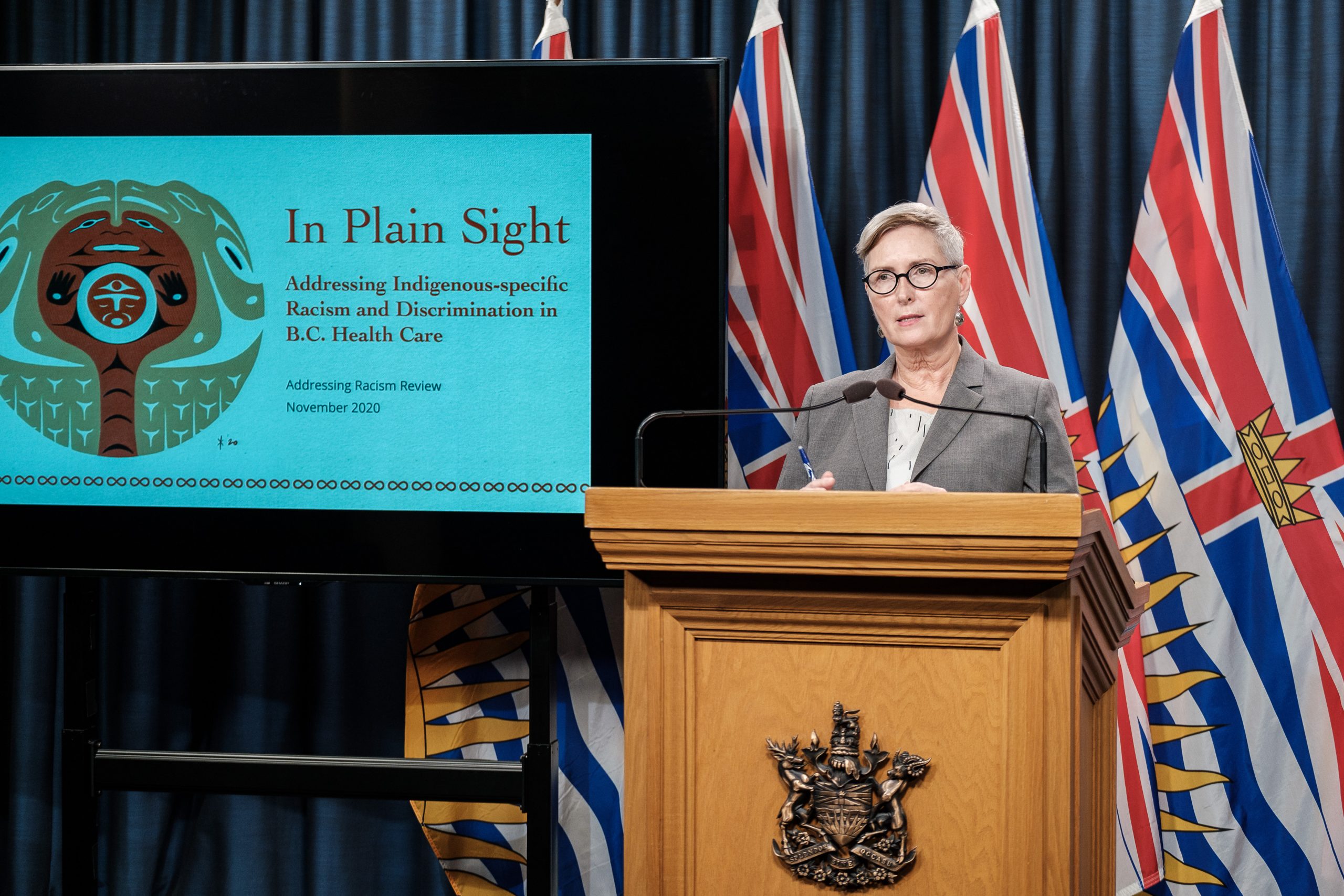 Minister of Health Adrian Dix presents the report, In Plain Sight: Addressing Indigenous-specific Racism and Discrimination in B.C. Health Care during a press conference on November 30, 2020 / Image via Province of British Columbia

“I feel overlooked. I've been made to feel like a drug seeker at times when I don't even do drugs. I hate taking pills.”

“You’re going through withdrawal, it’s from all the alcohol you people drink; you’ll have to wait for your booze.”

An Indigenous woman recalls hearing these words yelled at her from across the recovery room after she underwent surgery for a brain aneurysm back in 2018. She was one of many Indigenous people who shared their stories as part of a review of Indigenous-specific racism in the BC healthcare system completed this past year.

On June 19, 2020, the provincial Minister of Health, Adrian Dix, appointed Mary Ellen Turpel-Lafond to independently investigate allegations of discrimination towards Indigenous people in the BC healthcare system.

Dix appointed Trupel-Lafond, a member of the Muskeg Lake Cree Nation in Saskatchewan and former judge and provincial representative for children and youth. He said in a press conference that day, that this comes after being made aware of the “serious allegations of racist and abhorrent practices in an emergency room or emergency rooms in British Columbia.”

“The allegation is that a game was being played to guess the blood alcohol level of patients in the ER, in particular Indigenous people, and perhaps others. If true, it is intolerable, unacceptable, and racist.”

Turpel-Lafond, along with a small review team, launched a website and survey for Indigenous people, witnesses, and healthcare providers to voice their experiences with the healthcare system. They also set up a phone line and email for people to share specific incidences or knowledge of racism in the healthcare system—endured or witnessed.

During a press conference on July 9, 2020, Turpel-Lafond said she is grateful for the ministry’s call for an independent investigation for this situation.

“Based on the emails, calls and stories we have received so far, it is very much needed,” Turpel-Lafond said. “The objective is to examine what is happening and to work to build confidence in a healthcare system that supports all people in this province.”

That same day, Turpel-Lafond and Dix held a press conference to address the report’s findings.

“Our detailed examination of those allegations found no evidence of an organized game as originally depicted, namely with prizes and locating and occurring throughout emergency rooms across British Columbia … What I found, in fact, was at the point of care, there is direct prejudice and racism, touching all points of care and impacting Indigenous people in BC,” Turpel-Lafond said.

Although the review did not find the evidence of a The Price is Right-style game they were looking for, they did find something much worse: widespread stereotyping, racism, and discrimination against Indigenous people in the provincial health care system.

“I think this report—the fact that it was done so expeditiously given the substance and the extraordinary response from people—will have an enormous impact in BC, I believe across Canada, and elsewhere,” Dix said. “As we deal collectively with these very difficult issues, the report In Plain Sight shows racism at an individual and systemic level. Racism has made the BC healthcare system an unsafe place for many Indigenous people to access services and the care they need.”

Erik Blaney, an emergency services advisor for the Naut’sa mawt Tribal Council and Tla’amin Nation fire chief, said he feels “failed by the BC healthcare system.” Blaney has experienced firsthand the difficulties Indigenous patients go through while seeking healthcare.

After contracting Lyme disease 13 years ago, Blaney said he struggled to get the same quality of care non-Indigenous patients would get. He remembers several times when doctors would not respect him, or even believe his Lyme disease diagnosis.

“When I was struggling with Lyme disease, and not doing so well in hospital, I would find that advocating for myself was very difficult, and if my white wife came in and sat with me, the doctors would listen to her and they would actually, you know, run some additional tests that they wouldn’t have done if I had just gone in [myself],” Blaney said.

“I went in last year—I was really sick and I was having a reaction to some of the medications that I was using for Lyme disease. They shot me with morphine, gave me some morphine pills, and sent me on my way at four in the morning. I ended up back in the hospital again the next day. My wife came in and she was able to talk them into doing a whole suite of other tests, versus just ‘giving me some drugs and sending me on my way’ sort of thing.”

“I feel overlooked. I’ve been made to feel like a drug seeker at times when I don’t even do drugs. I hate taking pills.”

The report makes 24 recommendations to address the systemic problems it claims are deeply rooted in Canada’s past—one that includes colonialism, residential schools, Indian hospitals, and many other traumatic anti-Indigenous events. Turpel-Lafond said the 24 recommendations are meant to create a blueprint to root out racism in the healthcare system.

The 24 recommendations start with advising the BC government to apologize for Indigenous-specific racism in the healthcare system. Other recommendations are for the BC government to establish more positions for Indigenous representation in the healthcare system and to find ways to improve connections and work with the First Nations governing bodies and representative organizations.

The report suggests the provincial government establish three new positions that would be key to providing leadership in this area:

The report also calls for health authorities and health providers to acknowledge the prejudice and racism and take immediate steps to resolve it.

The review examined health data of approximately 185,000 First Nations and Métis patients and found that racism limits access to medical treatments and can affect the health and wellness of Indigenous peoples. In particular, it was found that Indigenous women are more impacted by racism in healthcare than Indigenous men.

“There’s a lack of trust in the system. And that’s why whenever an Indigenous person ends up in the hospital their whole family shows up, because they want witnesses there. So, having more Indigenous social workers in hospitals is going to help immensely,” Blaney said.

The BC Ministry of Health has promised to uphold their promise to listen and react to the findings in the report and to end racial injustice in the healthcare system.

“I want to say to you today that I’m 100 percent committed to making sure that the healthcare system here in BC is providing safe, high quality, accessible, and culturally safe care for all peoples in BC, and it is my determination that racism will have no place here,” Dix said.

“I’m committed to working hard on all of the changes outlined in this report, and I’m committed to doing that in partnership with Indigenous health and community leaders. I want to ensure that the structural and systemic changes that are recommended make a real and meaningful difference for any Indigenous individual who needs and seeks health services.”

The BC Ministry of Health said the toll-free phone line number, 1-888-600-3078, and email, addressing_racism@gov.bc.ca, will be kept open for people to continue sharing their stories or experiences of racism in the healthcare system. Visit the British Columbia Addressing Racism website for more information on the report.

“I just think there’s definitely some bias there and doctors don’t seem to be willing to do the work needed to try and seek medical interventions for Indigenous people,” Blaney said.

“You kind of feel like just another dead Indian to them.” 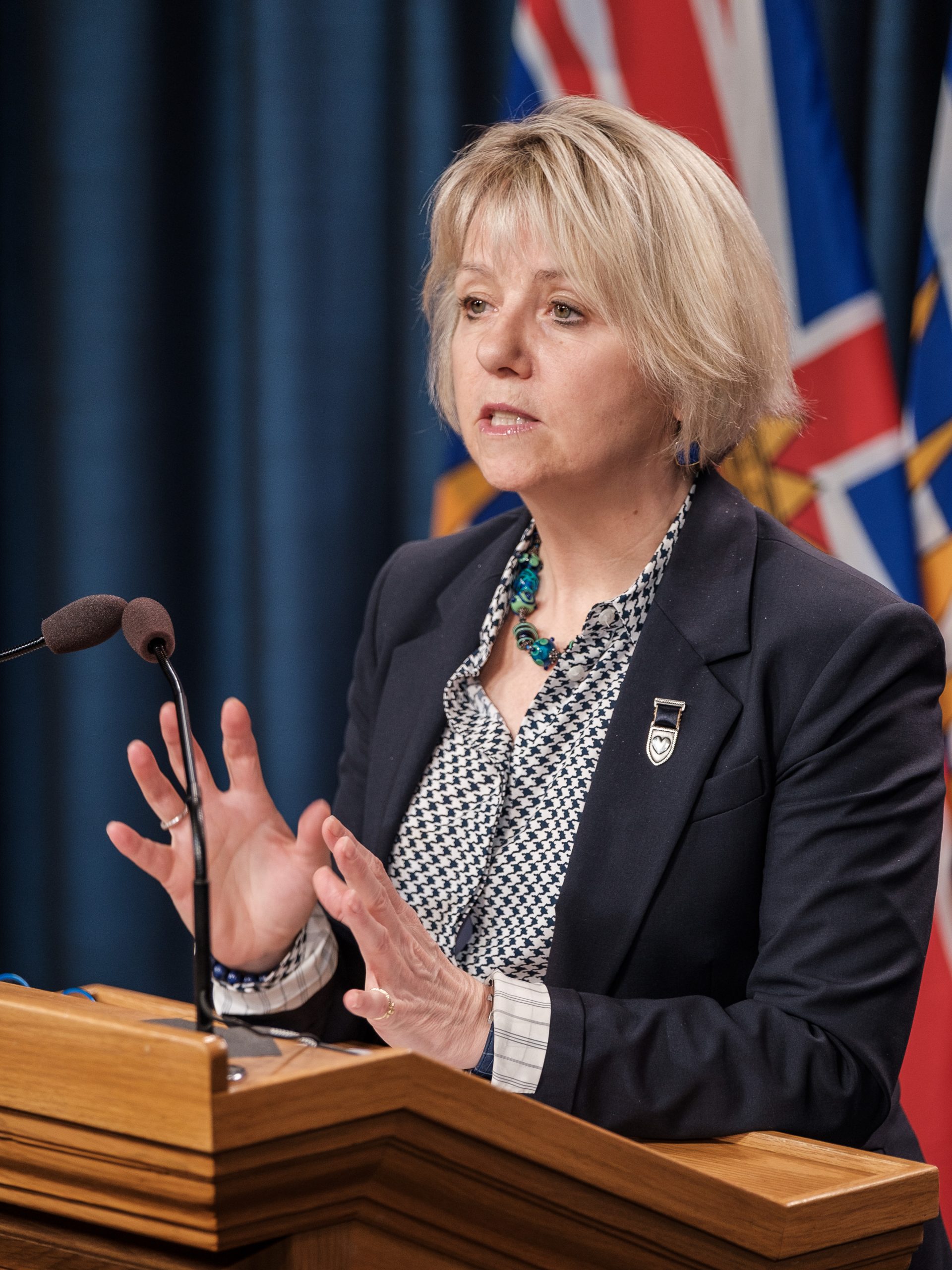