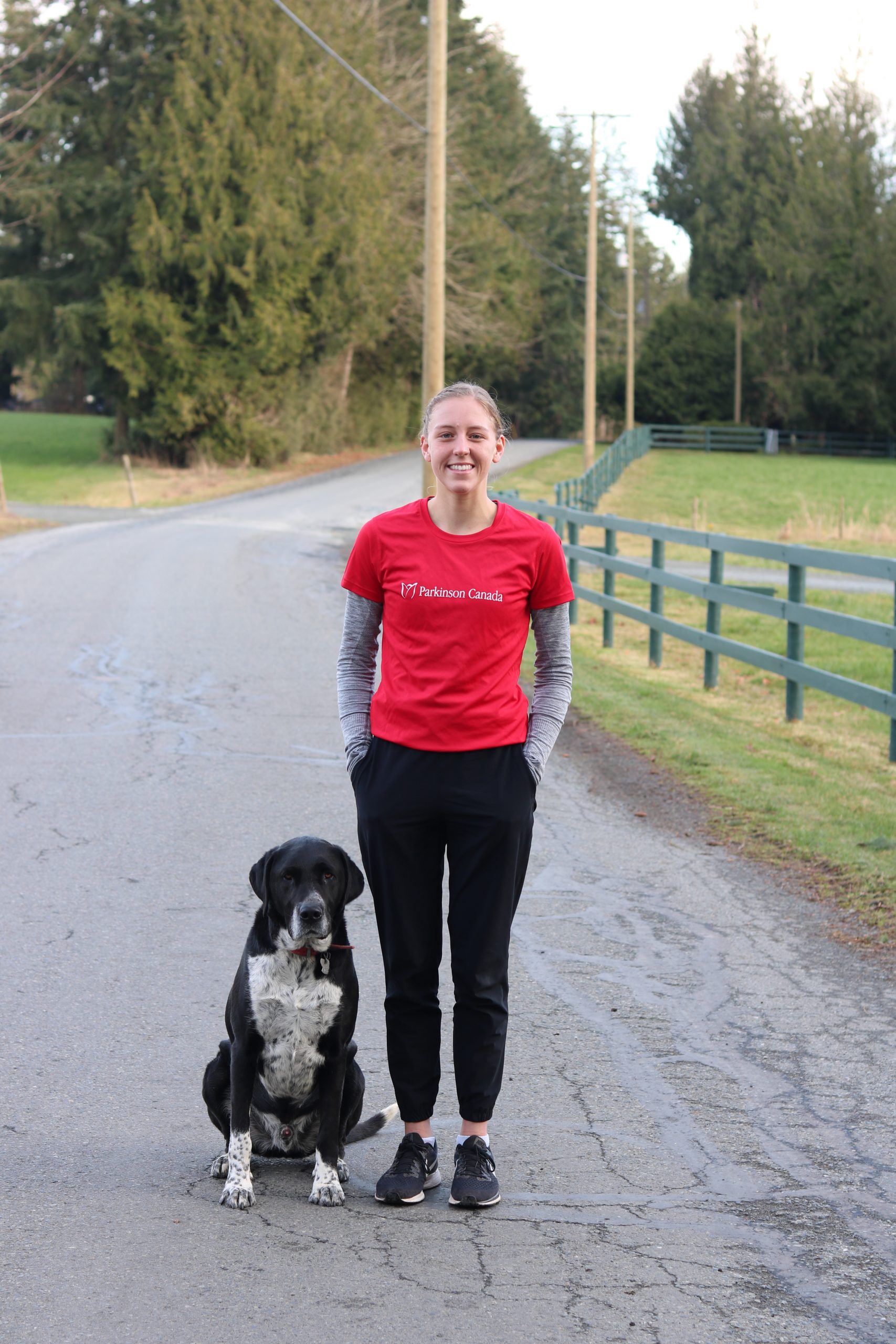 On December 19, 2020, at a brisk five degrees, Groenendijk put on her running shoes and kicked off her fundraiser by running up and down Mt. Sicker, near Chemainus, for a total of 18 km.

As Groenendijk’s kilometres rose higher and higher, so did the money she was raising. Just after 20 days of the fundraiser with ten more days to go, on January 7, she reached her $7500 goal.

Over the course of 30 days, Danielle Groenendijk ran 250 km—roughly six marathons—to bring awareness to, and raise money for, Parkinson’s disease.

Groenendijk is a fourth-year Bachelor of Science student at VIU with plans to become a veterinarian following graduation. She is very passionate about animals, and having grown up on a dairy farm near Chemainus, BC, one of her aspirations is to become a large animal vet.

At 21, Groenendijk likes to keep herself busy and active. She enjoys spending her free time dirt biking, hiking—especially overnight—and hanging out with friends, all while helping out on her family’s farm and being a star player for the VIU Women’s Volleyball team.

When COVID-19 put her busy life on pause, she decided to put all of her newfound free time to good use.

Groenendijk’s grandfather, John Kampman, was diagnosed with Parkinson’s roughly three years ago. At the beginning of his diagnosis, the disease was in its early phases, but since the start of the COVID-19 pandemic, his non-motor symptoms, such as disorientation, began to escalate.

“When I found out about him having Parkinson’s, I didn’t really know what Parkinson’s was, to be honest. … And with any disease it’s gonna have complications on their health, but you don’t really fully know. Each individual’s different,” Groenendijk says.

The Parkinson Canada website describes Parkinson’s as a “complex brain disease” that can progress at different rates for each person. The most common symptoms of Parkinson’s are tremors, stiffness, impaired balance, and weak muscles. When the disease progresses, many non-motor symptoms, such as cognitive changes, may appear.

The Government of Canada website says between in their most recent study, approximately 84,000 Canadians over the age of 40 were living with diagnosed Parkinson’s. The site says, “With the growing and ageing population, it is estimated that the number of Canadians living with parkinsonism will double between 2011 and 2031.”

Presently, there is no cure for Parkinson’s.

“It’s been really tough in that sense, because he’s also kind of a totally different person now, because of his health … I think it’s just hard to see someone progress through Parkinson’s and see how quickly things can escalate,” Groenedijk says.

While out on her runs, Groenendijk got ideas about how she could help her grandfather and other people battling Parkinson’s. During her spring semester, a project for her kinesiology class allowed her to research Parkinson’s and Parkinson Canada. From there, she learned about the fundraising resources Parkinson Canada has and found out it was a lot easier to fundraise than she had originally thought.

That’s when, a week before her grandfather’s birthday, she went to her family with the idea to run a fundraiser marathon pledge. With her family ready to support her, she got to brainstorming ideas and numbers.

According to Groenendijk, people who host a running fundraiser pledge with Parkinson Canada try to raise around $1k doing a one-day running event. Groenendijk knew she was capable of doing more.

With the goal set and the fundraising website made, Groenendijk thought, “Why don’t I start on my grandpa’s birthday?”

On December 19, 2020, at a brisk five degrees, Groenendijk put on her running shoes and kicked off her fundraiser by running up and down Mt. Sicker, near Chemainus, for a total of 18 km.

Groenendijk finished the day by posting photos and videos from the run and writing on her website, “Today is my grandpa’s birthday and what better day than today to start my fundraiser! I love you lots, Grandpa, and God’s blessings in the year ahead!”

Groenendijk continued to update her website throughout the 30 days with weekly recaps about her daily runs, always adding a smiling photo of herself from that day’s run.

Most of the routes she ran were around her family’s farm, but she also adventured into Duncan, Saltspring Island, and Nanaimo. Her favourite routes were the logging roads by her house because her dog, and trusty running companion, Bo, could join her.

On some occasions, Groenendijk’s family members would join her on her run. Her mom, dad, and siblings would bike or run beside her to take part in the fundraiser and keep her company. In the end, out of all the members of her family, it was Bo who ran the most—about 70 percent of the time—with her.

As Groenendijk’s kilometres rose higher and higher, so did the money she was raising. Just after 20 days of the fundraiser with ten more days to go, on January 7, she reached her $7500 goal. So, she made a second goal of $10k for the end of the fundraiser.

Then, on January 9, three days after hitting her first goal, she hit her second—raising $10k in 23 days. She raised her goal again, to $15k, and before the 30 days were up she hit that goal as well.

How did she celebrate smashing her fundraising goal? By running, of course.

So, after running the equivalent of six marathons, she ran a seventh.

After finishing her 30-day non-stop running fundraiser, she started her first week back at intense volleyball practice. At the first opportunity, she had to finally rest. She ran 42.195 km straight in one day. Her first ever marathon.

The solo marathon went a lot better than she thought it would. The weather was calling for a snowstorm, but it held out and stayed sunny all day. She admits she had no idea what to expect, but she was thankful her family was able to join her for different portions of the run.

“I almost can’t put to words how it feels [raising $17k] because I wasn’t even sure if I was going to get $7500, and then I did. I think about $17k, as it is a lot of money, and it’s kind of crazy how it came from so many different people supporting me and how quickly that can add up. It feels really good and I’m just happy to have been able to raise the [money] that I did for Parkinson Canada, but also to raise more awareness for Parkinson’s disease.”

Because Groenendijk is unable to see her grandfather right now, she and her family send his care home photos and videos of the fundraiser.

“[The care home] shows him my video clips, but we have no idea of how he reacted … but I know that he’s proud of me and I’m just thankful to be able to have done it for him and for everyone else with Parkinson’s disease.”

Even though the fundraiser is over, Groenendijk said she will be keeping her fundraising website up for people to learn about her journey and to make donations for Parkinson’s research. For more information about Parkinson’s, visit the Parkinson Canada website.

When life takes a turn, Groenendijk demonstrates that running the extra mile really can pay off.