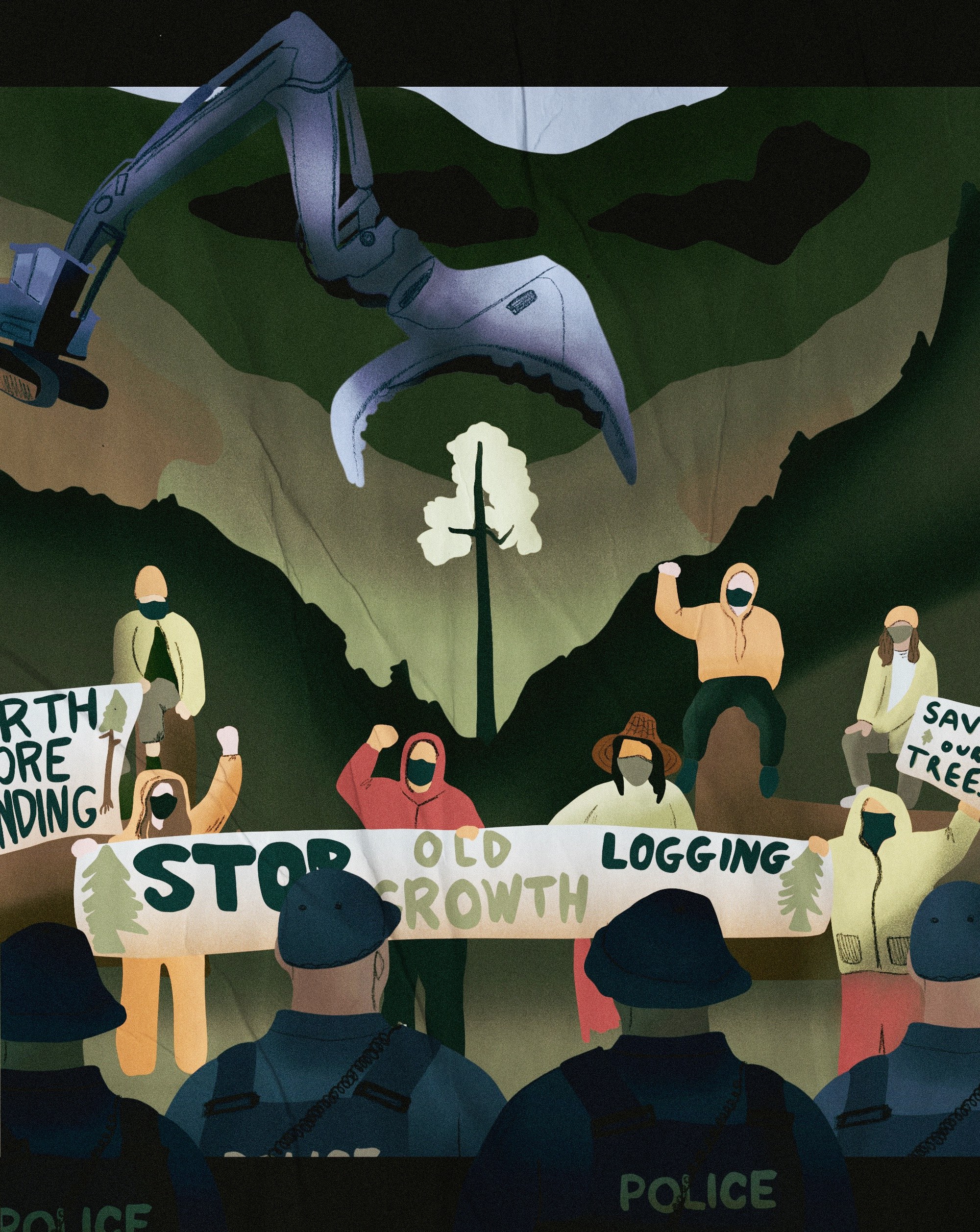 “Alongside the great biodiversity they encourage, these ancient cedars are our ancestors. They hold stories, wisdom, and have a life of their own.”

"So I asked the cop, ‘Do you even know why we’re here? Do you understand the entirety of the situation at Fairy Creek? Before you come out here to work, do you educate yourself on this?’ “And he replied, ‘It’s nothing I can’t read about in five minutes.’ And that shook me."

We rummaged through slash piles, meticulously picking the biggest, most sturdy logs. We grabbed boulders and discarded culverts—anything that would hold them off for even a minute longer. Quintessential Pacific Northwest clouds settled low among the towering western redcedars and Douglas fir. At the other end of the valley, clearcuts nagged the mountainside like an open wound, unable to be soothed. The heartbreaking dichotomy of the two views served to fuel us and everyone else at Ada’itsx, now globally known as the Fairy Creek Blockade.

With our arms full of old logs and debris, we stepped carefully over trillium poking through the piles, mindful of what the group of Indigenous youth had told us about the tiny white flowers being sacred. Beside me was the lovely and kind Sara Drew, a fellow VIU student I’d met when we worked together at a Greek restaurant in Nanaimo.

Then there was Zach Taylor, a smiley, burly 20-year-old who made the two-hour round trip to the remote forest as often as he could between shifts at a Nanaimo garden centre. The three of us were placed on hard blockade duty, a job that consisted of building a strategic structure that would hopefully delay RCMP and logging company Teal-Jones from reaching the ancient old-growth trees just minutes up the road.

When we walked up to the place we’d allocated for the block, we met up with eight others who had been tasked with the same job. We called our blockade “Black Gate,” its namesake derived from the charred black logs left behind from Teal-Jones burning the slash piles a year prior. The jagged, upright timber served as an ominous contrast between life and death: the burnt wood from the lush, green trees above.

Looking around Fairy Creek Headquarters (HQ), located near Port Renfrew on southwest Vancouver Island, the diversity of the folks willing to sacrifice their jobs, homes, financial security, and comfort to protect the last productive old-growth forests and Indigenous land sovereignty was an inspiring act of collective humanity. Grandmothers, grandfathers, families with small children. Queer folks, people of colour. Bakers, hippies, lawyers, realtors, professors, students. Even a few people who worked within the logging industry. Many people who likely would never have gotten along in daily life. Now we were all here, amidst a climate and biodiversity crisis, doing what we could to help. Sara, Zach, and I marvelled at how special the situation was.

“I’d never been a part of anything so big,” Sara says, looking back. “As soon as you got there, you were accepted into this community. Everyone was so wonderful, helpful, informative, and welcoming.”

Sara recalls the first time she went up to River Camp where Grandmother and Grandfather trees stood, both towering in their ancient 2000-year-old glory. “It was so humbling,” she says. Being Métis, Sara realizes it’s about more than just trees. “Alongside the great biodiversity they encourage, these ancient cedars are our ancestors. They hold stories, wisdom, and have a life of their own.”

River Camp and the surrounding area are all part of Teal-Jones’ cutblock TFL 46 and will likely be the first to go if the blockades fail. Hung around each of the camps and along the paths to Grandmother and Grandfather trees are signs that say, “We want your children to know these forests too,” and “Wilderness is where the soul of the planet resides.” It is confronting and emotional in ways only experienced when in the trees’ presence.

Sara says that visiting the ancient trees was both her fondest and hardest memory. “Sitting beneath those trees, looking up at them and seeing what’s at stake, knowing this is the last 2.7 percent of the old growth … it’s the last of what has been untouched by colonialism. Logging these gentle giants would be a direct act of the further colonialism of Turtle Island,” she says.

The issue of logging old-growth forests shines a light on the way colonialism and systems in place have affected Indigenous peoples, and how it continues to affect them.

Zach admits his views have shifted since spending time up at Ada’itsx, Fairy Creek. He was originally motivated to go because he’d seen that there was only a small amount of old-growth forests left in BC. “Then I learned how sacred the forests are from [Pacheedaht] Elder Bill Jones. It started off for me as a man versus environment issue, but now I see it as an issue on multiple dimensions, like matters of environment and Indigenous rights, which I didn’t know until I went up there and talked to people who understood it better.”

Zach tells of his favourite day, where he and a group of about ten people travelled to another road to build a “pop-up blockade.” They had found out industry workers were going to move in the next morning to cut down an unprotected block of old growth not far from HQ.

“We woke up super early and just started gathering whatever we could,” he says with a laugh. “We were wreaking havoc! Blasting music while covering the road with rocks and dead stumps and whatever we could find. By the end of it we were exhausted and soaked in sweat, but it was so beautiful.”

Looking back, it was those snapshots of human connection that made my time in the forest so memorable. It almost makes one forget why we’re there in the first place. There’s this flow you enter when working on a task like building a blockade or helping out in the kitchen at HQ. Then you look up and see the contrast between the old growth and the dead stumps from a cutblock.

The news of yet more arrests and the targeting of Indigenous folks by RCMP on the frontlines each night is heartbreaking. As of early September 2021, the number of arrests surpassed that of The War in the Woods in Clayoquot Sound in 1993, making Ada’itsx Fairy Creek the largest act of civil disobedience in Canadian history.

Zach says there were many times he cried. One that stood out in particular was when he and an older gentleman hiked past police checkpoints through the dense bush under the cover of night to find cached cement bags to build more blockades. They got to the block and began digging the hole for a sleeping dragon—a PVC pipe encased in cement in the ground that arrestees would chain themselves to in order to block police and industry advancement. Just as the cement was setting, the police came up the road.

“The cement wasn’t even dry yet, but the police didn’t know that,” Zach says. The older man, who was willing to be arrested, plunged his arm into the dragon.

“When the policeman got there, you could tell that he just hated us,” Zach says. “You could see it in his eyes and hear it in the way he talked.” He tells of the cop belittling the man, saying things like, “Are you a homeowner? It’s ridiculous that you’re doing this.”

Zach continues. “So I asked the cop, ‘Do you even know why we’re here? Do you understand the entirety of the situation at Fairy Creek? Before you come out here to work, do you educate yourself on this?’

“And he replied, ‘It’s nothing I can’t read about in five minutes.’ And that shook me. I had to walk away. I started crying as I walked away.”

Being at the blockades is a combination of grief for the forests, anger at the current systems allowing this to happen, and a reinforcement of faith in humanity. Black Gate is gone now. RCMP tore through it the day HQ was raided, but hope still remains.

Sara says, “I felt a lot of hurt each time I went, but following the hurt I felt love. Love for the people, the trees, the movement, and an incredible amount of hope.”

To ask government officials to halt the logging of old-growth forests in British Columbia, contact:

BC Minister of Forests, Katrine Conroy: