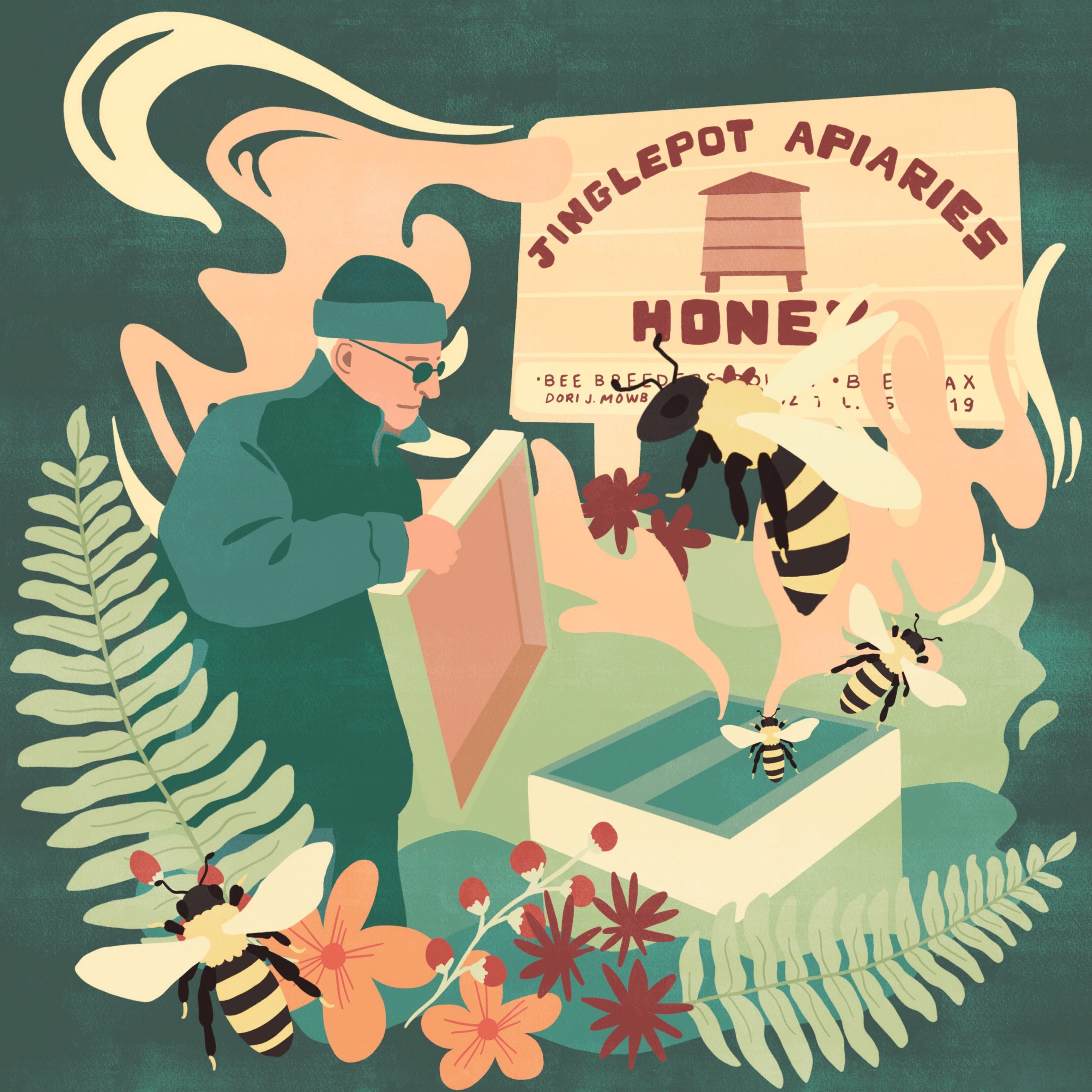 "You don’t just step into it. It doesn’t work like that. There’s so many facets to it you have to slowly get used to."

Sol in his Honey Shed / Image via Sabrina Mudryk

"The type of beekeeping that I do [is] a labour of love."

You couldn’t see them so much as you could hear them. The bees buzzed quickly past my head, busy collecting pollen for their colonies. It was spring of 2021, and I had gone to Jinglepot Apiaries to pick up some honey. I grew up with fresh, locally sourced honey where I lived in Alberta, spoiled by the efforts of the bees and beekeepers from my great grandfather’s apiary. Store-bought just wouldn’t cut it for me.

I walked into the yard, and out of a little side building I saw Sol Nowitz, a man in his seventies with black circle glasses, a South African accent, and a sun hat on his head. He had clasps around his ankles to hold his pant legs closed to keep the bees and angry wasps from sneaking up. He brought me into his honey shed, speaking with such passion and excitement that I considered beekeeping myself.

When the chance arose for an interview, I called him up, thinking for sure he would be free. After all, it was spring and summer when the beekeepers were supposed to be busy, not the fall, right? I later found out that beekeeping is a year-round job.

Like most commercial beekeepers, Nowitz started off as a hobby beekeeper. He began his beekeeping journey in South Africa, where he is from, before eventually moving to Nanaimo with his wife, Dori, in 1983. Both of them were captivated by the island’s beautiful outdoors. He has been beekeeping for a total of 46 years now. The type of beekeeping that Nowitz has specialised in is the breeding of bees, although he does still produce honey.

“I remember there’s a famous book, it was Fifty Years Among the Bees,” he said. “At that time when I started beekeeping it was something you couldn’t comprehend, 50 years amongst the bees, and it’s crazy, it’s insane. [I’ve been beekeeping for] 46 years, next year will be my 47th, so I’m three years away from half a century of beekeeping. Suddenly, I am virtually at that point.”

Nowitz has always been interested in challenges. He knew from a young age that he wanted to learn a craft and beekeeping stood out as a particularly difficult and fascinating one.

“I can’t almost even explain why I started. It helped that I really loved honey, right? That was a good start,” he said. “At that point in time, like everybody, you start off as a hobby beekeeper because you know you’re working part-time too … you don’t just step into it. It doesn’t work like that. There’s so many facets to it you have to slowly get used to.”

With his nearly half a century of experience, Nowitz pointed to three major challenges to beekeeping on Vancouver Island: varroa mites, climate change, and humidity.

The varroa mites are an external parasitic mite that reproduces in honeybee colonies. It attaches itself on the bee’s body and feeds on their fat. Varroa mites were introduced to the island around 25 years ago and have been a major challenge for beekeepers to contend with. They spread quickly and easily, usually travelling with bee swarms or hiveless drone bees trying to join other colonies. The impacts varroa mites have had on the honeybee colonies of the island have been absolutely devastating.

Not only do the mites affect the honey production, but they also have the potential to cause colony collapse. Nowitz said that he would feel satisfied after all his years of beekeeping if he was able to help make progress in the breeding of bees that are more resilient to the effects of the varroa mite.

“But we are a long way away from that. I’m not sure, to be honest, in my lifetime that I’ll see that.”

Climate change can have a massive impact on bees, both wild and those that are kept. The fluctuating temperatures can change when flowers bloom and throw off the bees’ pollination cycle. This can lead to loss of habitat for wild bees that do not migrate, and to increased numbers of the varroa mites which can spread diseases and collapse colonies.

Intriguingly, Nowitz mentioned that this year was his best for honey in a long time, despite the extreme summer heat waves brought on by climate change. Exposing the colony to high temperatures (around 45 degrees Celsius) is one treatment that is sometimes used in smaller-scale hobby farms to lower the levels of varroa mites. This year’s heat may have actually contributed to the lower amounts of varroa mites in the Jinglepot Apiary’s colonies, with little to no effect on the honeybees themselves.

Humidity on Vancouver Island is higher than in many other parts of Canada. Some start-up beekeepers or those who have not familiarized themselves with the climate in Nanaimo may not have the proper equipment or training to help combat this issue. Metal lids to protect against the rain are important, as is proper ventilation. Poorly ventilated bee hives can get a lot of moisture in them, which can drip on the bees and, given time, cause massive damage to the colony. A good ventilation system, regular maintenance of bee equipment, and checking in on hives after a particularly bad rainstorm can help protect against humidity impacts on a colony.

Each of these major but common challenges are often dealt with, in part, during the fall and winter seasons. The two major time-consuming activities for beekeeping in autumn are feeding the bees and treating the hives to keep the mite levels low.

Nowitz has a smaller number of colonies than a typical commercial operation. However, he still cares for an impressive 175 hives, often doing multiple feedings and treatments over the fall to ensure the success of the bees for the springtime. Nowitz uses a sugar solution to keep the bees fed throughout the winter. All of the treatments Nowitz uses are organic, which also makes it all the more time-consuming.

“I want the end product to be pristine, which is why I am using all organics,” he said. “I use it to control the mites. The good thing about the organic treatments is that the product becomes benign once it’s done its stuff. So you are not left with any kind of residue in the wax.”

Everything that the beekeeper does in the autumn and winter sets the groundwork for the potential success of the bees and honey in the spring and summer. Between having enough food stores for the bees, ensuring enough bees are in the colony for warmth, maintaining equipment to keep the bees dry, and keeping the mites within the colonies under control, autumn is a busy season.

The more I talked to Nowitz, the more I learnt just how challenging it is to be a beekeeper. Bees are no simple hobby or business. The start-up costs for equipment can be very expensive, especially if you want to be a commercial beekeeper, with many just starting out needing to have a part-time job as well.

There is also a steep learning curve: you have to accumulate knowledge on your honeybees, the things that impact the honeybees in your area, and be ready for new challenges and problems to solve. Any number of factors both within and beyond your control can contribute to a poor honey crop or the collapse of your colonies. Nowitz is a man who seems to not only love his bees, but also enjoys the challenges that come with taking care of them.

“Because the type of beekeeping that I do [is] a labour of love, you can’t make much money out of it,” he said. “I believe in the local product. It’s very important, which is why, for example, if someone said ‘Sol, I’m coming to buy everything from you outright.’ … Yes you can physically buy the bees, but you cannot buy everything that comes with it, the interests that I have, that goes into making it successful … I’m busy working with this, trying to make it better. And that’s what’s keeping me going.”