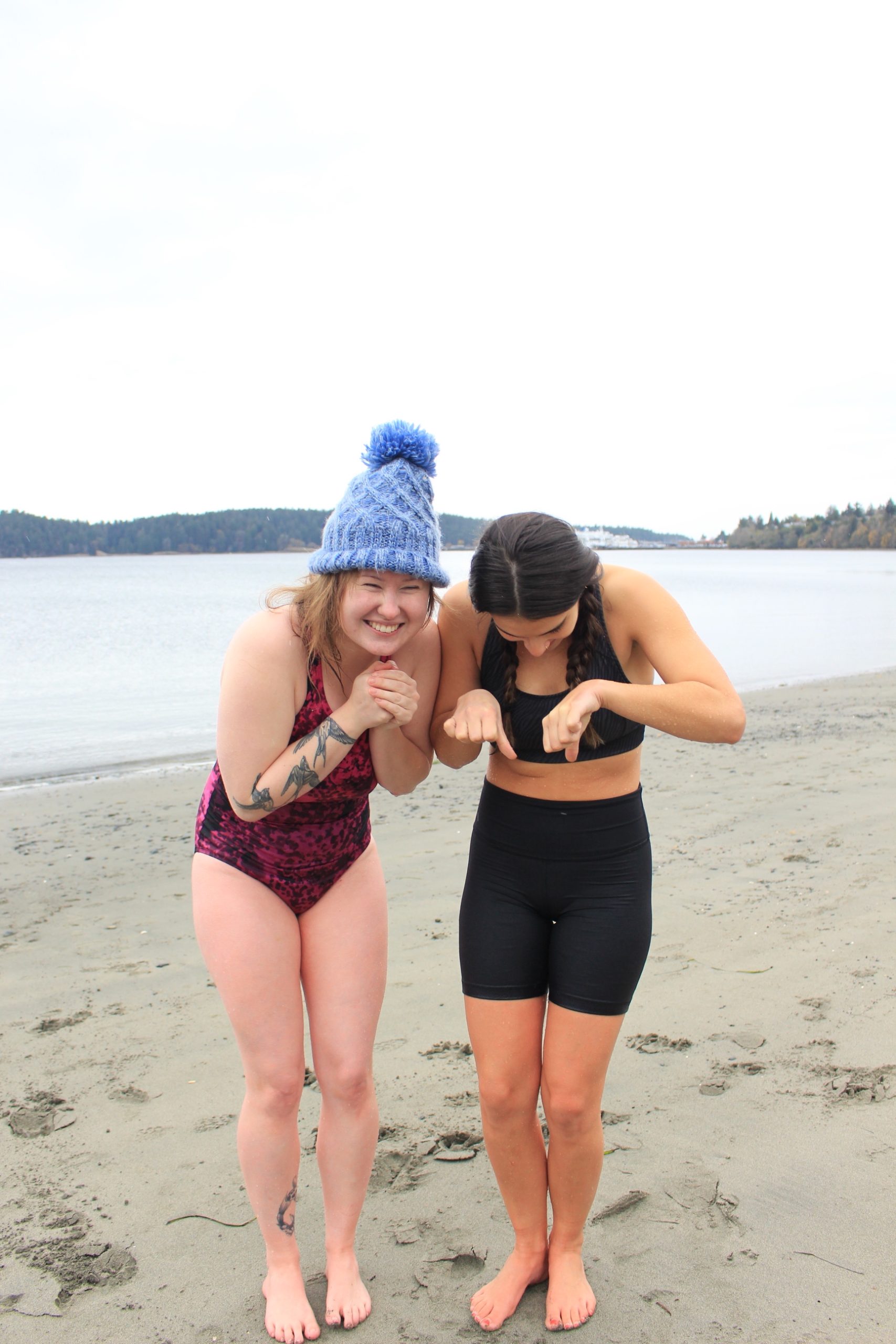 It was surprisingly challenging to take 30 deep breaths the first morning I tried the Wim Hof Method. I wanted to stop at 15, but I pushed myself to keep going.

“I was curious and somewhat sceptical of this crazy Dutchman, who had obviously gone insane and was trying to start a cult.”

I’m waist deep in the waters of Departure Bay with The Nav’s Megan Zolorycki.

It’s November and the year’s first snowflakes fall around us while we struggle to breathe in the icy water.

My entire body is screaming at me to run to shore, but I force myself to stay. I try to inhale deeply through my nose and out through my mouth.

It doesn’t work. My breath is rapid and shuddering. We manage to stay in the ocean for over a minute before going back to the safety of our towels.

He is known as the notorious “Iceman” who climbed Mount Kilimanjaro in only his shorts, swam underneath ice for 66 metres, and ran a half-marathon north of the Arctic Circle barefoot.

Through his experience, Hof has created a legendary method: The Wim Hof Method.

I first learned about it while doing my Yoga Teacher Training in 2020. I was told the method could help regulate my body and mind, and leave me feeling less anxious and more grounded.

There are three pillars to the Wim Hof Method: Breathing, Cold Therapy, and Commitment. The aim is for one to connect more deeply to the body and mind.

I asked some of my friends from The Nav—Associate Managing Editor Megan Zolorycki and Illustrator Celia Brand—if they would be interested in doing an experiment with me.

Our goal? Practice the Wim Hof Method for an entire week.

I wanted to see if there would be any noticeable changes in our stress levels and overall well-being.

After some convincing, they agreed.

Studies on the Wim Hof Method website show that the physical benefits of the method include improving energy, immune system, blood pressure, and sleep quality levels.

They also suggest mental health benefits. For example, it may help users recover from burnout and relieve stress.

A study by Radboud University in 2011 also showed how Wim Hof could voluntarily influence his autonomic nervous system, which controls internal muscles like the stomach, heart, and glands.

The research on the Wim Hof Method is far from conclusive, however.

One study showed there was little to no difference between Hof’s natural ability to produce heat in cold exposure and that of his identical twin brother, who does not share the same “iceman” lifestyle.

But I wanted to try the method for myself.

I did the breathing exercises consistently every morning for a week. I noticed a difference immediately.

Light-headedness and tingling fingers are normal and harmless.

For the final breath, inhale as deeply as possible, then exhale all the air out, pausing for as long as possible at the bottom of the breath. Inhale again and hold for 15 seconds before breathing out.

And that ends the first round. Up to four rounds can be done without taking a break.

When I was younger, I often had panic attacks. My breath felt like it was trying to escape me and my heart beat rapidly.

I learned to always be conscious of my breath, hoping not to slip into another attack.

I became so fearful of having another panic attack I would keep my breathing shallow and safe. Taking deep breaths felt like wading out into the cold ocean where I might be swept away.

Now I’m a full-time student with two jobs and stress finds me daily. My thoughts race with constant deadlines and responsibilities, and my heart beats faster.

I realize I’m holding my breath. Clearly, I need to learn how to breathe better.

It was surprisingly challenging to take 30 deep breaths the first morning I tried the Wim Hof Method. I wanted to stop at 15, but I pushed myself to keep going.

After doing the breathing exercise, I felt like I was floating. I could look at my day much clearer—moment-by-moment instead of the whole year.

Each time I tried the method, it became easier. On the last day, I felt so comfortable with deep breathing that I kept doing it throughout the entire day. I learned to take control of my breath instead of being scared of it.

For a guided version of Wim Hof’s breathing technique, I recommend the free app Go Deeper. The app guides you through the method, so you only have to focus on your breathing.

The cold therapy aspect of the method involves submerging the body in cold water. This can reduce inflammation and improve sleep quality, concentration, and immune response.

When persuading the others to try the method, the cold therapy aspect was the one I really had to sell.

Zolorycki was not looking forward to it.

“I absolutely despise the cold. Even the thought of being cold makes my body ache,” she says in a text message. “So when Bella asked if I would try this experience, my initial thought was, absolutely not. But because I love Bella dearly, I thought I’d try it out.”

While Zolorycki and I only did one ocean swim, both her and Brand incorporated cold showers into their morning routines.

“As someone who suffers from anxiety and an easily disrupted nervous system, I was intrigued by some of the benefits of cold-water therapy,” Zolorycki says.

For me, the cold showers were also challenging. I could only do it four times out of the week. I live in a basement suite, and it gets as cold as it does outside. To turn the faucet from anything but hot hurts my heart.

“I’m someone who’s quite in touch with my body and my nervous system. As a yoga teacher, this is essentially a huge part of what you learn in training,” Zolorycki says. “The cold water lets you escape for a minute and reset your day. It almost stops intrusive thoughts from happening, because your body is trying to deal with this new phenomenon [cold water].”

However, Zolorycki mentioned that the effects didn’t last the whole day. She’d feel refreshed after her cold shower but any benefits wore off by the afternoon.

“The ice bath was more difficult, but I found that I got better results from it, like lowering my anxiety and feeling more present.”

Brand used deep breathing as a distraction for staying present in the ice bath.

“I didn’t realize how panicked my breathing was when I first got in from the shock of the cold, but when I started to pay attention to my breath and really focus on it, I found that I could tolerate the cold temperature better,” she says.

Brand says she noticed a huge difference after doing both the breathing and cold therapy for the whole week,

“I think it’s great if you are a student struggling to get out of a slump or rut with your work-life balance,” Brand says. “I am usually very stressed this time of year with projects, and I found that it actually was very beneficial for my stress levels and typical anxiety.”

For more information on the long-term effects of the method, I spoke with Billy Baker, an IT Technologist at VIU and also a Wim Hof enthusiast.

“I was curious and somewhat sceptical of this crazy Dutchman, who had obviously gone insane and was trying to start a cult,” Baker says. “But apparently he did his homework, and scientists were publishing studies about this. So I decided to look into it further.”

And it was worth doing so—Baker has been integrating the Wim Hof Method into his daily routine for the last two years.

“I felt like I was tired all the time. I’d take a nap in my car at lunch break,” Baker says. “Being a computer worker, I didn’t get much exercise, and I wanted to change that.”

So he did. He signed up for Wim Hof’s free course and even read his book.

“What I like about it is that the exercise is not hard. I can stumble out of bed, brush my teeth, go sit down and breathe,” he says.

The differences have been life-changing for him.

“After the first round, I am much more awake. By the end of the process, I’m ready to start my day, and I jump into a cold shower—yeah, all cold, no hot water. The energy lasts all day,” he says.

“I don’t get sleepy in the afternoon, and I can tolerate much lower temperatures easily. The benefits of the exercise keep me coming back. I’m happy to wake up that extra hour earlier than I normally do—I use that extra time to fit more into my day.”

Baker says the method is worth a look for everybody.

“The benefits improve many aspects of daily life. If you struggle with your health, this might be something that helps. But it is not a cure-all. I still struggle with low energy.”

However, Baker is still committed to practicing the Wim Hof Method and believes it’s a crucial part of his morning routine.

Baker has become his own iceman and his commitment to the method inspires me to continue working on making it a part of my routine. Even if there are days I can’t bring myself to turn the shower faucet to cold, the worst thing I can do is not try.

Although Zolorycki says she will never do it again, Brand says that trying out the method is worth it.

Even though we didn’t fully commit to the Wim Hof Method, I still think we became icewomen. And at the very least, we could laugh at each other.

The fact we decided to try it—to run straight into the ocean, lower ourselves into a bath of ice, or even take a few deep breaths—is what matters.

Bella is a second-year Creative Writing and English student at VIU. When she was six years old, her mom helped her write her first book, “The Shed Princess.” The Grand Forks Library even kept it on its shelves for a few weeks. These days, Bella is on a mission to have her books on every library’s shelves.