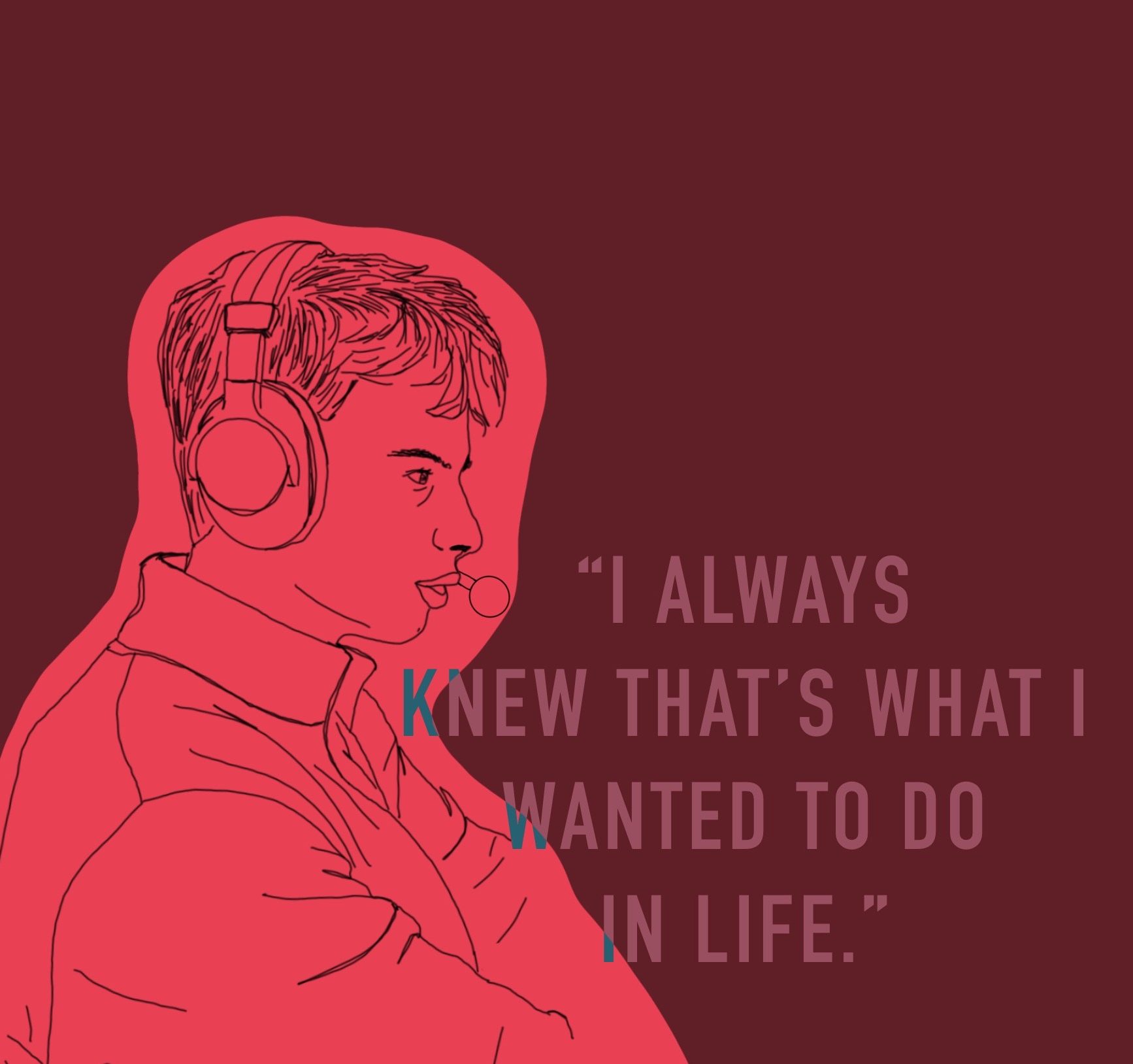 Flourishing careers, exciting matches—everything could be perfect. If it wasn’t the World Cup in Qatar.

“I don’t want to support FIFA and their corrupt system that throws all values overboard for a little bit of money.”

Ella Blaschko is an international student from Munich, Germany. She’s in the second year of her journalism studies and spent the fall term at VIU.

A lifelong dream, a milestone and, above all, a great opportunity.

For 21-year-old Michel Egenolf and Claas Schönfeld, 20, their dream of covering the FIFA World Cup has come true.

“I’ve been fascinated by this world from a young age, and it was clear to me that I wanted to participate,” Egenolf says.

The two young sports journalists from Munich, Germany are currently in the thick of things, recording auditor reports of World Cup matches for the international live ticker app “Flashscore.”

The two have been commentating for about a year with Flashscore, working their way from smaller soccer leagues up to the sports top matches, such as the Champions League.

Now, they’ve reached the top of the mountain.

“This is the highest level in soccer ever. A World Cup is an event that can’t be compared to anything else,” Claas says.

If it wasn’t the World Cup in Qatar.

Qatar was named host to the 2022 World Cup back in 2010, with accusations of bribery, mistreatment of migrant workers, and shoddily constructed stadiums following the host nation ever since.

Qatar is a desert state. Stadiums were built under the worst working conditions in lethal temperatures, and the death toll of migrant workers is thought to be several thousands.

Qatar, a country where women barely experience self-determination let alone equality. Qatar, where homosexuality and queerness are considered “psychological harm” and freedom of expression is trampled. Qatar, the scene of one of the greatest sporting events ever. Hosted by FIFA, one of the most successful and powerful organizations in the world.

For those opposed to Qatar as host, the hope is that FIFA will have to act if no one watches their event. A message must be sent, pressure applied. Decisions cannot be made on the basis of money.

The situation is too dire for one to look the other way. Or in this case, continue to watch.

The whole debate does not pass by Egenolf and Schönfeld either. Although both say it was never really an option for them to not comment on the games, the doubts are still there. “You really don’t feel good about it,” Egenolf says. “But when you’re in it professionally, you’re just affected in a whole different way. Of course, this is a huge opportunity for us.”

Boycotting is easy if you are able to do it.

“It’s easier when you’re not committed and don’t have a passion for it,” Schönfeld says. “There is a perception that there is so much money in the industry that no one has financial problems. But that’s wrong.”

He explains that there are many people who don’t have the choice to boycott the World Cup. Jobs and necessary financial support are on the line.

One person with much on the line was American sports journalist Grant Wahl, who died suddenly December 9 from an aneurysm while covering the tournament in Qatar.

Wahl was very critical of Qatar’s treatment of migrant workers and members of the LGBTQ+ community. On November 21, he arrived for the USA’s first match against Wales wearing a Pride shirt and was initially denied access to the stadium, being told to change his shirt.

The 2022 World Cup was the eighth of his reporting career.

Now, the World Cup is almost over with the final match between France and Argentina set for December 18. Have the events and protests of the last few months made an impact?

Like most aspects of this World Cup, the answer is complicated.

German TV ratings for a Germany match have not been below 20 million since 2010. In the country’s first match, A 2-1 loss to Japan, the numbers didn’t even reach the 10 million mark.

In Canada and the United States, however, more people are watching than ever before.

FOX, an American station that has refrained from mentioning Qatar’s human rights abuses, has seen a major bump in viewership. The 2022 World Cup featured a Canadian team for the first time since 1988, and the Canada-Belgium match received record numbers, with 1 in 4 Canadians watching some or all of the broadcast.

But some young people are also distancing themselves.

A survey I conducted via social media showed that only a third of participants said they would still watch the games. About 100 mostly young people (average age 20) participated. Many were students, mainly from Canada and Germany.

Seventy-one percent said they would not watch the matches, some as a protest, others because soccer simply doesn’t interest them.

Most of the comments I received as to why they’re boycotting concerned Qatar’s violation of human rights. Within the survey, I heard statements like, “I don’t want to support FIFA and their corrupt system that throws all values overboard for a little bit of money.” Another said, “I don’t agree with Qatar’s transmission of values, especially about women and homosexuals.”

It may be easy for those who haven’t invested in soccer to condemn the World Cup and not watch the matches. But for hundreds of millions of people, the event is something they’ve been looking forward to for four years.

Niklas Zink, a fellow student from Germany and FC Bayern fan club member, is one of them. The sport has been an integral part of his life for as long as he can remember. The World Cup is the grandest event for a soccer fan and, every four years, Zink watches.

This time, he isn’t.

“It is completely wrong to hold a World Cup in such a country,” Zink says.

Thus, the highlight status of a World Cup simply cannot be reconciled with what is happening in Qatar at the moment. “It’s not what you normally think of as a World Cup. I am absolutely against it.”

Egenolf and Schönfeld, however, will take advantage of this opportunity. Not only for themselves and their young careers, but also to inform those listening of the criticisms of Qatar’s World Cup.

“We want to use our platform,” Schönfeld says. “We have a few thousand people listening to us, including some who aren’t aware of the situation. With our work, we hope to reach them as well.”

Egenolf agrees. “Simply boycotting won’t do any good now,” he says. “We need to take active action and not just look the other way.”

He and Schönfeld will watch and comment. The opportunity is too great, perhaps unique.

Everything could be perfect.

If it wasn’t the World Cup in Qatar.

For more of Ella Blaschko’s work, see her portfolio.

The opinions expressed in this publication are those of the contributors and editors. They do not purport to reflect the opinions or views of The Navigator or its members.