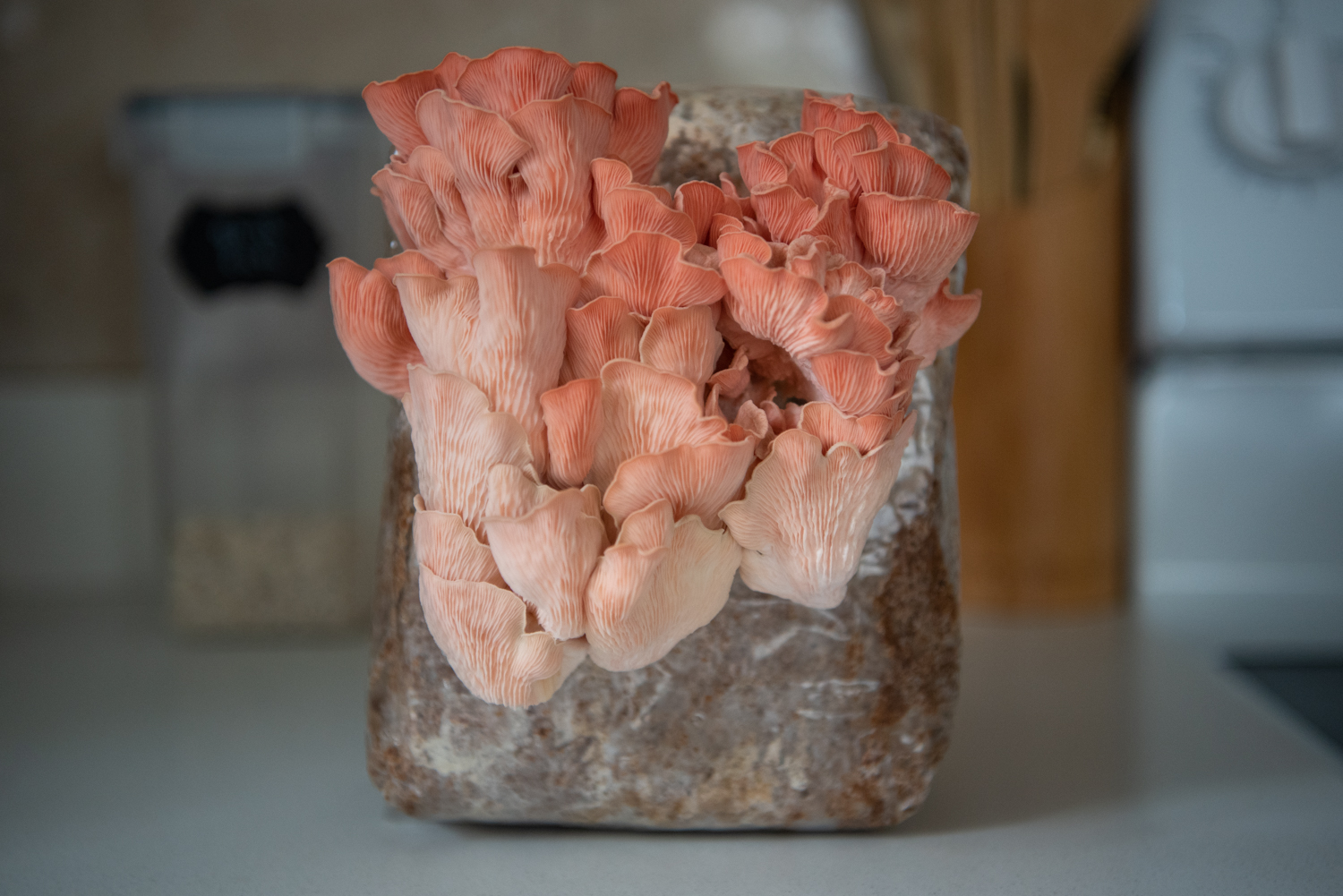 The kit, which grew a pound of oyster mushrooms within a week, was a huge success.  I felt connected to these mushrooms I helped bring into the world.

A spray bottle, an essential component of mushroom kits, sitting in front of a lion’s mane mushroom / Image via Spenser Smith

These tiny mushrooms, called “pins,” will double in size each day. A few days to a week later, the mushrooms will be fully mature and ready to harvest.

Spenser Smith graduated from VIU in 2019 with a major in Creative Writing and a minor in Journalism. In addition to growing mushrooms, he writes poetry. His first poetry book, A brief relief from hunger, will be published by Gordon Hill Press in 2023.

Last year, I watched Fantastic Fungi, a documentary about mushrooms on Netflix, and something mushroomed inside me.

(The movie took 15 years to film because of how painstaking these timelapses were to capture.)

Mesmerizing, too, were the facts dispensed.

For example: underground networks of fungi interact with plant roots, allowing them to share nutrients and information, which the show likened to nature’s version of the internet.

When the movie finished, I came down from a trip I didn’t want to end.

I turned to humankind’s internet and ordered a mushroom grow kit for $30 from Grow Mushrooms Canada (the edible, non-psychedelic kind, in case you were wondering).

The kit, which grew a pound of oyster mushrooms within a week, was a huge success.

I felt connected to these mushrooms I helped bring into the world. Halfway through the growth process, I began referring to them as “my children,” to my wife’s and cat’s discomfort.

Within a few months, I learned how to make my own mushroom kits and started a business selling them, Folk Fungi. I even made a TikTok about them—my first one ever. The clip, a mushroom kit growing to the tune of Harry Styles’ “As It Was,” went viral.

Now, I want to help bring these fantastic fungi into more homes.

How to grow them

A typical kit includes a fruiting block (a plastic bag containing a growing medium that will eventually “fruit” mushrooms) and a spray bottle. Some kits also include a humidity tent.

Tons of companies sell mushroom kits and, no matter who you buy from, the growing process is essentially the same.

Cut an “X” into the middle of the fruiting block.

Fun[gi] Fact: Fungi don’t depend on sunlight in the same way plants do. While plants need sunlight to create energy, fungi get energy from the decomposition of organic matter. For fungi, sunlight is simply a natural cue that it’s time to start fruiting mushrooms.

Daily spraying is the most important part of the process. Mushrooms need humidity to thrive—without adequate humidity, your fruiting block won’t produce mushrooms.

If you’re growing oysters or lion’s mane, two of the most common species found in kits, expect to see tiny mushrooms growing from the “X” within a week or so.

These tiny mushrooms, called “pins,” will double in size each day. A few days to a week later, the mushrooms will be fully mature and ready to harvest.

What to do with them

If you’re using a mushroom grow kit, chances are you love to eat them.

With oyster mushrooms, I like to fry them in butter and garlic.

Lion’s mane, on the other hand, can be used to make vegan crab cakes.

Lion’s mane also has a host of medicinal benefits, from boosting mental functioning to reducing inflammation. These benefits can be harnessed from eating the mushroom or making medicinal extracts from it.

If you’re not planning on using your mushrooms right away, put them in a paper bag and stick it in the fridge. Depending on the species, they will last a few days to a couple of weeks stored this way.

At one point, I was growing way more mushrooms than I could eat, so I started sharing them with my elderly neighbour.

There is a language barrier between us (she mostly speaks Vietnamese), but the language of free, fresh mushrooms connected us pretty quickly.

After bringing oyster mushrooms to her door on several occasions, she offered me fresh shrimp she purchased from the market.

There’s a lot of things I love about mushrooms and growing your own food, but I particularly love how they bring people together.